The Western Slope is rolling up its sleeves and making a difference for Colorado’s climate.  In terms of tangible progress across the region developing alternative and innovative energy solutions.  And the first weekend of May in Paonia.

That Western Colorado is stepping up makes good sense, and not only because we want to help lead in doing our part to solve the Colorado climate crisis.

Demand for renewable energy, and the jobs that brings, is up across the globe, in the U.S. and right here in Colorado.   And that means renewable energy makes good economic sense too.

Installing solar panels on home rooftops and in giant multi-megawatt utility-scale solar farms is one of the United States’ fastest-growing ways for both residents and power companies to reduce their climate impact in a warming world.

For the solar industry, helping to reduce America’s carbon footprint means inviting those with skilled hands to apply for a job.

The solar sector is growing so quickly as solar panel costs drop that employment in the industry jumped 21.8 percent in 2014, adding 31,000 new jobs in that time for a total of 174,000 solar workers nationwide, Luecke said. Solar employment is expected to jump by another 36,000 workers this year.

Articles like this point to a real future in the pursuit of new energy and power technologies.  Innovative projects are changing not only how Americans generate their own power, but how we generate and share power on the ‘grid.’

Some utilities are fighting the movement toward more local generation, just as they are fighting new carbon rules–often resorting to scare tactics and fear.  But other utilities, including a number of Colorado’s rural electric associations  are embracing the transition.  Many local governments are also making real investments in renewable energy installation.  And its no wonder with headlines like this one from Newsweek:

Bi-partisan leadership – from Rep. Scott Tipton on the federal level and Governor John Hickenlooper in the state  – has helped spur growth in hydro projects that take advantage of the seasonal flows in Colorado’s canals and ditches.

Holy Cross Energy partnered with Aspen Skiing Company and Oxbow Carbon’s shuttered Elk Creek Coal Mine to capture methane that had just been getting vented and use it to generate electricity.

The Delta Montrose Electric Association is taking on Tri State in a FERC filing asking for relief from the coal-fired power provider’s 5% cap on local generation.  Grand Valley Power is helping fund a solar garden–tied into the grid–and dedicated to helping low income ratepayers.

Boulder famously took the issue to the ballot and is launching its own municipal utility to speed its transition to cleaner power.  Meanwhile the cost of renewables is dropping quickly.

And all this good news cannot come too soon.  Climate Change is real, and what we are now experiencing of it is largely caused by human activities, and a result of the dominance of fossil fuels for our energy.   Which is why the transition to new energy economy can hardly come fast enough.

A February report on the impact of climate change for Colorado, from scientists at the Cooperative Institute for Research in Environmental Sciences (CIRES), looks somewhat dire:

Sea-level rise may not be not eating away at Colorado’s borders, but climate change exposes other critical vulnerabilities in the state, according to a new report. Rising temperatures will likely take a toll on cattle and crops, for example, and could more often leave junior water rights holders with little water and few options.

The new report, “The Colorado Climate Change Vulnerability Study,” was commissioned by the Colorado Energy Office in accordance with the Colorado Legislature’s HB13-1293. It’s a sector-by-sector analysis of the challenges that state residents and leaders will have to deal with in coming decades. It also details many of the ways Coloradans are already grappling with these issues, and where other strategies may help mitigate risk.

“All of Colorado is burning”

It’s not yet 2002, when Governor Bill Owens made that statement but forecasts point to an early, long and fierce fire season.  Our location, at the edge of the U.S. Southwest brings a particular set of climate concerns around water, drought, insect outbreaks, forest die-offs, and wildfire.  But politically, as Colorado faces this climate crisis, many of our leaders fiddle or worse.

Colorado is already an arid land, where “water’s for fightin’ and whiskey’s for drinkin’ ” and climate change is likely to make it much worse.   An earlier CIRES report (August 2014) looked at this particular climate vulnerability, as part of the Western Water Assessment:

As Colorado’s climate continues to warm, those who manage or use water in the state will likely face significant changes in water supply and demand, according to a new report on state climate change released today by the Western Water Assessment and the Colorado Water Conservation Board.

Rising temperatures will tend to reduce the amount of water in many of Colorado’s streams and rivers, melt mountain snowpack earlier in the spring, and increase the water needed by thirsty crops and cities, according to the new report, “Climate Change in Colorado: A Synthesis to Support Water Resources Management and Adaptation,” which updates and expands upon an initial report released in 2008.

So facing these daunting future, it is time to face this crisis head on.  And how do we move forward, to build on the positive movement in the renewable and energy markets, while adapting to a drier, hotter Colorado? 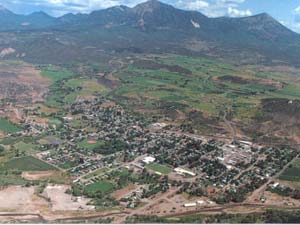 This is what we will set out to tackle in the first annual Western Colorado Climate Challenge in Paonia Colorado, May 1 -3.

This is no ordinary conference. It’s a hands-on-working conference for those who want to make real change, sooner rather than later, while having some fun along the way.  Ultimately, everyone attending will take away a plan and a personal pledge to work toward being carbon neutral by 2020 and to taking the steps to reduce water consumption by 50%.

This is the essence of the “Switch 2020 Contract.” Rather than waiting for others to act, the Western Colorado Climate Challenge is about seizing the opportunity to begin solving these issues ourselves, locally, regionally, statewide, and eventually nationally and globally.

The weekend kicks off Friday, May 1, with the Solar Fair hosted by Solar Energy International (SEI) at their campus outside of Paonia.  The Solar Fair will include exhibits from organizations and businesses in the region, live music, and light food and beverages (included with the conference fee or available for purchase), and include a short program launching the challenge weekend.

This free and open-to-the-public event also launch of SEI’s long-awaited Solarize North Fork Valley program where residents of the North Fork interested in purchasing solar electric (“PV”) systems for their homes or businesses can sign up for a free remote site assessment and initial quote.

The main portion of the Western Colorado Climate Challenge will be based at The Hive Paonia, the North Fork’s coworking and business incubation hub.  It runs all day Saturday and  into Sunday morning, with optional afternoon field trips.  Both the Challenge and the field trips requires registration in advance (details follow in the article).

The Western Colorado Climate Challenge weekend closes with a showing of the acclaimed documentary Merchants of Doubt at the Paradise Theatre of Paonia.

Colorado Can Lead the Way to America’s New Energy Economy

Colorado can become a global leader in solving America’s climate crisis, and the Western Slope is uniquely situated to play a large role in that effort.

The Western Colorado Climate Challenge and Solar Fair will bring together some of the regions’ leading organizations, businesses and a diversity of stakeholders and experts ready to roll up our sleeves and develop action steps to get the job done.  We will use rapid prototyping techniques to get at the heart of an issue , and develop action plans on how we will address it locally in our own communities, businesses, and lives.

Working on the Western Slope with Mountain West Strategies and longtime North Fork resident and conservation advocate (and diary author) Pete Kolbenschlag, the Climate Summit model has been adapted to address challenges specific to the rural and mountain communities of Colorado’s Western Slope.

Topics covered, and the four concurrent hands-on challenges we will tackle at this year’s event include rural solarization; addressing water conservation and river system resiliency in an era of water scarcity and drought; and we can remove barriers and foster collaboration to develop more local power generation.

The Western Colorado Climate Challenge will work to leverage existing efforts, activity and expertise across the region to help facilitate a rapid transition to a more sustainable Colorado.

The goal of Solarize North Fork Valley program is to simplify the process and lower the price of installing PV systems by providing education on solar, and a quick easy process to purchase solar through SEI’s pre-selected installation partner. Property owners who purchase a system with an SEI installation partner prior to July 31, 2015 will reduce costs for themselves and for their neighbors.

Together these projects allow western Colorado residents to act immediately, and to engage in shaping our own energy and resource future. It is also the opportunity to learn about critical issues facing western Colorado, while meeting interesting people, noshing on farm-fresh delicious snacks and top-quality local juices, cider and beverages, and enjoying Colorado’s beautiful springtime in the North Fork valley.

The Western Colorado Climate Challenge requires registration and is limited to 150 participants.  Admission is $60 for individuals, or $135 with Saturday Lunch, evening reception, and the Sunday field trips and movie.

The Solar Fair if free and open to the public.  The Sunday Climate Matinee showing of Merchants of Doubt is open to the public and requires a full fare conference ticket, an optional add-on VIP Pass, or a $5 donation at the door. Some partial scholarships are available by contacting the event organizers.

Register by going to our Eventbrite registration page www.eventbrite.com/e/western-slope-climate-challenge-2015-tickets-16162051130

Food and drink will be provided by local chefs using the valley’s world famous agricultural and artisanal bounty.