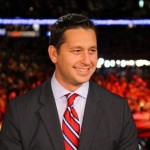 Eli Stokols, who came to Denver as a general assignment reporter in 2005, is leaving KDVR-TV Fox 31 Tuesday as one of the state’s top political reporters. He also became a Fox 31 anchor, launched his own public-policy TV show, and wrote nonstop on multiple platforms.

I had coffee with Stokols, and we talked about his ten-year run in Denver and his future job at Politico in Washington DC. Here’s an edited version of our conversation:

Stokols: I’ve been looking for an opportunity to report on politics from a national platform. I don’t think that’s any secret. And, frankly, part of that is because in Colorado you get a taste of doing that, because every campaign here is nationalized. There is no shortage of great political stories to cover here, which helped me to broaden my work. You come to a point in your professional career when you need a different challenge. On some level, because I’d been here for so long and was considered one of the veterans, a lot of people come to you with information, and it gets easier. And you can find yourself not working as hard because stuff comes to you. Or you find yourself not as excited when the campaign cycle comes around because you’ve done a ton of them.

And what are you going to do there?

I’m going to cover 2016, mostly write about it. I imagine I’ll cover a lot of the presidential candidates early on.

Yeah. I’ll be traveling a lot. That’s going to be exciting. I’ve been joking with people. It’s about time someone gives up statehouse reporting and goes and covers the presidential race, because what America really needs is more reporters covering the presidential race. You understand going into it that it’s going be hard to come up with stories and angles, but it’s exciting. It’s probably a cliche, but if you’re a political reporter, and that’s what you’re interested in, the opportunity to cover a presidential race and be on the trail is a bucket list thing.

Speaking of the state legislature, will Fox 31 replace you?

The upshot is, this was never a position we had because management said we had to cover politics. I don’t know what they will do. [See CJR’s Corey Hutchins’ take on this here.] It’s disappointing. You get this opportunity, and then you leave. And you look at what you built. And I know [9News political reporter Adam Schrager] felt the same way when he left. You want it to continue. And so it’s bittersweet.

Here’s a sad question. You’ve established Fox 31 as a go-to source of local political news. Now you’re leaving, and you say you’d like to see things continue. But it doesn’t look like they’re going to. And there doesn’t seem to be any incentive for Fox to do it, in terms of ratings.

What I’ve done has never been about ratings. I think there needs to be more decisions made in local television that are not made based on ratings but are based on the greater good, the public good. And you get criticized for being a media elitist when you say this, but I will unabashedly say, as journalists, we have a responsibility to determine what the audience and the greater public really need to know about–and make fewer decisions in terms of what we do and don’t cover based on what we think they will like seeing on the news.

Bottom line, you don’t think that ratings will suffer with your departure?

What will happen to the station?

I really do think Fox 31 is moving in the right direction. The new news director, Holly Gaunt, is very smart, sees the big picture, sees things clearly within the market and within our newsroom. And [she] will continue that station’s upward trajectory. I think [Fox 31 anchor] Jeremy Hubbard is, I think, the best anchor in the market. There are a lot of talented people there. I think Fox 31 has a decision to make about what kind of footprint they make in terms of political coverage.

What’s it going to take to change viewer habits in Denver. You’ve busted your ass. Your station is very competent, but yet you’ve sat there at the bottom, or close to it. It has got to be frustrating.

I won’t say [9News] hasn’t done a lot to maintain [it’s top slot in the market] and earn that. Some of it is journalism. A lot of it is also branding and community involvement. They sponsor everything. They are a juggernaut, and it’s not just because of the news department. But they are less dominant than they were when I first got to the market. And there are opportunities to challenge them. At the CBA awards, it was Fox 31 and 9News that won most of the awards. They do a good job. A lot of stations do a good job, but changing viewer habits is sometimes as simple as finding that right anchor team and that chemistry. Channel 7’s morning show was killing it when they had Ana Cabrera on there. She is a special talent, and there’s a reason CNN said, “We want to take you.” And they did take her. And now their morning show is not the same. And it takes nothing away from other people who are on the morning show.

I think Jeremy Hubbard is that kind of talent. He’s very good. He’s only been back here in this role for a short time. There’s a real consistency with him.

There’s something really great about covering state and local politics. You get a personal interaction with people. You see them at the grocery store. You see that in DC too, but I never felt it was the same. What do you think you are going to miss about being here?

The relationships are the hardest thing to give up, because in a smaller market like this you really get a lot of access to people–except when it’s campaign season. [It is] amazing how people who are your best friends suddenly disappear during campaign season. It takes time to build something like I feel I have here in Colorado. And DC, it’s a bigger pond but there are a ton more fish in it too. There are too many journalists.

And more sharks, too.

I’m looking forward to being in a city, and writing for a publication, where there’s no question about whether people are interested in politics.

One of the most exciting things about going to Politico, and the reason I wanted to go there, is because, one, you don’t have the requirements of doing broadcast television that naturally, in some ways,degrade the depth of your journalism. They help you in some ways too.The Cory Gardner interview [during which Gardner repeatedly denied the purpose of a bill that Gardner co-sponsored] wouldn’t have been anything if it weren’t a televised interview. So it’s just different.

The big thing is, I will never be told by an editor there, “That’s too inside baseball; no one cares.” I won’t hear that. And I hear it almost every day and have for ten years. And that is one of the things that’s most exciting to me, is working for a political place like that.

And it’s true. It’s hard to get people to pay attention here. That’ll be fun.