Thanks For Nothing, John McCain and Lindsey Graham 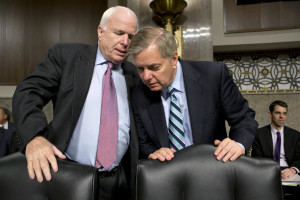 A former Republican presidential candidate and a White House hopeful will visit Denver next month to discuss violent extremism in the world and how the United States should respond.

U.S. Sens. John McCain of Arizona and Lindsey Graham of South Carolina are the featured speakers at the April 1 event hosted by The CELL and The Denver Post. Ed Henry, the chief White House correspondent for Fox News, will moderate the 7 p.m. program at the Denver Performing Arts complex.

The discussion will include the Islamic State, al-Qaeda, Iran and the growth of extremism in Europe, according to the organizers. 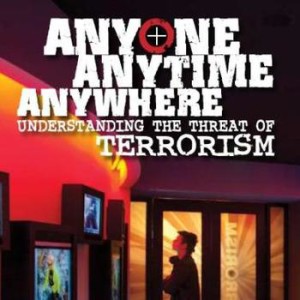 Anyone. Anytime. Anywhere. Be afraid!

It’s surprising–or maybe it’s not, depending on how cynical you are–that Frank fails to mention Sens. John McCain and Lindsey Graham’s most recent contribution to the debate over American foreign policy. McCain and Graham are both signers of the now-infamous letter from 47 Republican Senators to the government of Iran, attempting to undermine President Barack Obama’s authority to broker an agreement to halt that nation’s nuclear weapons program. The fierce backlash by the public against this letter has since caused McCain to backtrack, claiming the letter was signed in haste as Senators were leaving Washington ahead of bad weather–but not actually admitting it was a bad idea like more or less every responsible outside observer has.

Then again, a whitewash of this recent foreign policy embarrassment would be about right considering the event’s hosts. Mizel’s Counterterrorism Education “Learning Lab” has been described by critics as more of a propaganda tool for spreading fear of the tactic of terrorism among the public–thus short-circuiting discussion of underlying issues–than a legitimate public education project. The central exhibit’s name “Anyone, Anytime, Anywhere” captures the sense of paranoia “awareness” the place is meant to foster.

All of which we have to assume is fine with McCain and Graham, who would rather you be afraid like the CELL teaches visitors to be than think critically about American foreign policy. Especially when that might lead to pointed questions for them personally.