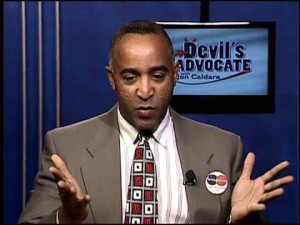 A former talk-radio yapper, Derrick Wilburn, is running for Vice Chair of the Colorado Republican Party.

Wilburn once co-hosted a CO Springs radio show called, “Black, White, and Right,” which aired on KZNT 1460-AM. Wilburn, who’s African-American, represented the “black” part, while former congressional candidate Robert Blaha wore the “white” mantel. And both were right–as in tea party, as opposed to “correct.”

To give you an idea of  the depth of Wilburn’s tea-party-ness, during one radio show a couple years ago, Wilburn gave “Almost Human” honors to Republicans generally, and he added that GOP chairman Ryan Call is emblematic of Republicans. So he sounds about as mad at his fellow Republicans as other party leaders leading up to Saturday’s election, and the division has even crept into the marriage of Mike Coffman and Cynthia Coffman, who might be mad at each other over it.

Wilburn: “The problem with the Republican Party in that regard is it’s a brand issue.  You know, there are people who don’t even want to say it in public.  You know, ‘I’m a Republican.’  You kind of say it under your breath, looking around, hoping that nobody hears you.  Now, that’s because it’s not cool and it’s not hip, but it is cool and it is hip to be a Democrat.  To be a Democrat is rushing our state and country into financial insolvency.  But for some reason, it is cool to say that.”

On the other hand, in Wilburn’s own vice-chair race, he faces a former Olympian, Eli Bremer. How cool is that? And another vice-chair candidate, Mark Baisley did a cool thing and joined up with Chairman Ryan Call to create a tea-party-establishment-Republican ticket. And the other vice chair candidate, Debra Irvine, lives in the cool mountains. So there’s some coolness in the GOP.

Baisley’s alignment with Ryan Call displeases Wilburn, as it has talk-radio hosts across the dial.

“I don’t know how anybody can look at the position that Mark Baisley’s taken and say, ‘He’s still the liberty guy,'” said Wilburn on air last month. “It seems relatively apparent to me that he has said to the liberty crowd, ‘No, I’m not. I’m attached to this side of the aisle now.'”

On the radio in 2013, Wilburn was upset at fellow Republicans for failing to adequately support his efforts, as founder and president of American Conservatives of Color and Rocky Mountain Black Conservatives, to diversify the Republican Party. He complained at the time that Republican State Chairman Ryan Call had failed to attend one of his monthly meetings, despite such meetings being held monthly for two-an-a-half years.

But Wilburn’s diversity campaigns seem to be a draw among some Republicans, who will be voting in Saturday’s election to choose state party leaders.

“Derrick’s work nationally with people of color (or what ever term you prefer) is the type of work we need here in Colorado to expand the GOP’s presence and membership,” wrote John R. Mitchell, Chairman of the Ouray County Republican Party on Wilburn’s campaign website page. “If we can gain only 5 to 10% of the minority vote, we just about cannot lose any elections. I gladly endorse Derrick for Colorado GOP Vice Chair.”

Wilburn is hell bent on fixing the problem, but, if you believe him and KLZ radio host Ken Clark, few Republicans, except Wilburn, are on board.

Clark: Well, and let’s face it, you were single-handedly responsible for getting Republicans to go to the Martin Luther King [Jr.] parade.  I mean, nobody was even talking about it.  That wasn’t on anybody’s radar until you stepped up and started demanding that they do.  And I was with you when we were at that event that was in Five Points.    What — I can’t even remember what it was called.

Clark: Yeah, Juneteenth.  I was with you when you were down there doing that, and that was interesting.  But it doesn’t seem like anybody else is reaching out.  Derrick?

Wilburn: Well, and it’s a hub and spoke approach. So, the hub is major events. The Juneteenth, the Martin Luther King.  Last week, was Chinese New Year, we should be setting something up for that.  That’s the entry point to the community.  And then, you back that up throughout the rest of the year, by building coalitions, by getting to know the business owners, by becoming members of the Chambers of Commerce, and developing some familiarity.  So, you know, the Republicans — and God bless ‘em! — but they sit around and scratch their heads and say, “How do we do this?”  So, that’s when Dave and me and Casper and the rest of my little crew came around and said, “This is how you do it! And rather than just tell you how, we’ll actually walk it like we talk it, and do it ourselves.”  And we’ve had some effect the last five years.  Now, it’s just time to go to the next level.