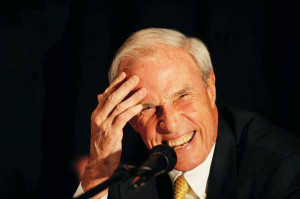 Since becoming President of the University of Colorado, former GOP gubernatorial candidate and major political donor Bruce Benson has slowly but steadily nudged Colorado's flagship education institution into a place much more accommodating to conservatives. We've talked in the past about CU's former "visiting professor of conservative thought" Stephen Hayward, whose guest professorship didn't really go so well in retrospect. And then there's the recent habit of CU's Leeds School of Business churning out pro-fracking position papers that don't stand up to elementary critical thinking.

The Boulder Daily Camera's Mitchell Byars reports on another example–but this one may have lessons for both sides of the debate:

The Arizona Congressman who last week asked the University of Colorado to disclose the sources of funding for professor Roger Pielke Jr. now admits an additional request for communications regarding such funding was an "overreach" — but defended the search as an effort to seek important disclosures for figures in the climate change debate.

Democratic Rep. Raul Grijalva last week sent letters to seven different universities — including CU — that employed researchers who have been skeptical or controversial in their positions on climate change in an effort to determine whether any had received research funding from fossil fuel companies.

In the letters, Grijalva asked the universities to disclose all sources and amounts of external funding for those professors, as well as any communications regarding the funding or testimony by the professors to Congress or other bodies…

At the time of Grijalva's request, Pielke wrote that he has disclosed all possible conflicts of interest and has no funding "declared or undeclared, with any fossil fuel company or interest."

CU officials also stood behind Pielke last week, stressing that, "None of his research has been funded by oil companies or fossil fuel interests."

We've heard different opinions of the academic work of Roger Pielke, but by most accounts he very intelligent and no stooge for the fossil fuel industry. To the extent that his testimony is sometimes used to promote climate change denial, often much more broadly than anything Pielke himself has claimed, that's an issue. But we can't call that Pielke's fault, and we don't like the idea of academics' motives being questioned the way that Rep. Raul Grijalva did in this case–especially when you consider how that has happened in recent Colorado history in the other direction. We take Pielke and CU at their word when they say his work is not funded by the oil and gas industry, and we're confident their response will document that.

The only thing we can add is that under Bruce Benson, professors at CU whose scholarship just so happens to reinforce the oil and gas industry's position probably don't need to get special funding. With that in mind, we might suggest that Rep. Grijalva inquire somewhat above the level of individual academics, and consider the possibility of a more systemic problem.