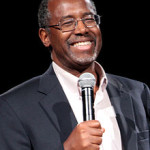 Ben Carson may be a neurosurgeon, but he’s no rocket scientist.

It was a bit of a surprise last summer when Ben Carson won a Presidential straw poll at the Western Conservative Summit in Colorado (hosted annually by Colorado Christian University), though perhaps it shouldn't have raised too many eyebrows. After all, the Western Conservative Summit is the same place where Herman Cain won a Presidential straw poll in 2011, supercharging the Herminator's brief bid for the GOP nomination in 2012.

A retired neurosurgeon with no real political resume, Carson is not well known among average American voters. But he is a darling of the far right because…well, he's the kind of guy who will say shit like this:

Carson believes that sexual orientation is a choice that people make. Carson has also watched too many prison movies, as CNN reports:

Asked whether being gay is a choice, Carson responded: "Absolutely."

"Because a lot of people who go into prison go into prison straight — and when they come out, they're gay. So, did something happen while they were in there? Ask yourself that question," Carson said. [Pols emphasis]

That argument, Carson said, "thwarts" the notion that homosexuality isn't a choice, which is at odds with the majority of the medical community, including the American Psychological Association, who says "most people experience little or no sense of choice about their sexual orientation." Slate's Mark Joseph Stern also outlined the scientific arguments against this particular belief last year.

Carson's comment comes as Republicans try to avoid the kinds of incendiary comments on cultural issues that cost the party two Senate races — when Missouri's Todd Akin and Indiana's Richard Mourdock drew national attention for their remarks on rape — and hurt Mitt Romney in 2012.

CNN was unable to find other Republican Presidential candidates willing to respond to Carson's nonsense.