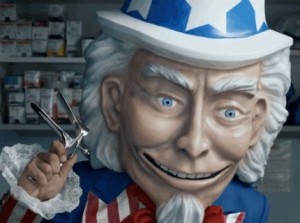 Landgraf said that because there are no reporting requirements for abortions, there is no way of knowing what happens to born-alive infants at this time. "The baby," she said, "can be set on a shelf and allowed to die."

"It is already illegal to kill a living human being," [Pols emphasis] [Rep. Lois] Court said, also adding, "I am really tired of my Republican colleagues bringing forward divisive social issues when we really should be focused on rebuilding our middle class here in Colorado."

The same arguments apply here as with the other GOP anti-abortion bills that have been introduced to certain death in the Democratic-controlled House. The motivation must be deeply emotional and ideological, because politically, it's just disastrous. Whatever marginal benefit running these bills have with motivating the conservative anti-abortion base is totally undone by the moderate voters these bills alienate. Politically, it's a tremendous gift to Democrats, proof positive that the "War on Women" is no myth.

There seems to be this idea that Republicans can insulate themselves from criticism over abortion, perhaps following Cory Gardner's example of gumming the issue to death, even as they run anti-abortion legislation year after year.

2014's experience notwithstanding, we do not share their optimism.