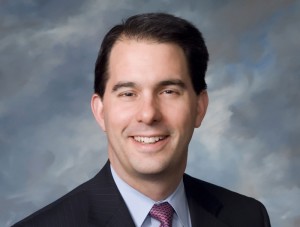 Republican Gov. Scott Walker of Wisconsin, a darling of conservatives since his campaign to weaken public sector unions after winning office in 2010, has been working to raise his profile lately in advance of a possible run for the presidency in 2016. We took note last week of Walker's comments in response to Rudy Giuliani's statements about President Barack Obama's "love" of America. Yesterday, Walker was asked about his credentials to take on the Islamic State of Iraq and Syria (ISIS), and his response is drawing a lot of criticism today:

Wisconsin Gov. Scott Walker (R) on Thursday said his experience undermining labor unions in Wisconsin has prepared him to take on the threat of the Islamic State in the Middle East.

"If I can take on 100,000 protesters, I can do the same across the world," Walker told a packed crowd at the Conservative Political Action Conference, in response to a question about how he would fight the terrorist group, which has killed thousands in Iraq and Syria.

Walker was referring to protesters who led an unsuccessful recall effort against him in 2012, after he proposed a budget that stripped Wisconsin's public sector unions of their collective bargaining rights. The protests lasted for months and catapulted Walker onto the national political stage.

Likening a vicious terror group currently the target of American airstrikes to the teachers and public employee union members who protested against Walker in 2011 might sound good to attendees of the Conservative Political Action Conference (CPAC), but for everyone else it's evidence of either extreme cluelessness, or a malice toward fellow Americans who just happen to be union members that many would call disqualifying for higher office.

And ISIS/union comparisons aren't the only way Gov. Walker is failing to put his best foot forward:

Well sure, after all, that rape story in Rolling Stone was a hoax! So the kids don't need to know about rape on Wisconsin campuses.

It's early, but Scott Walker is not off to a presidential start here–more of a Rick Perry start.

And we all remember how that ended.