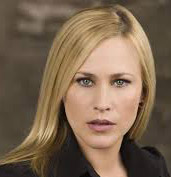 This is the face we imagine Patricia Arquette would make after listening to Colorado Republicans dismiss pay equity concerns.

"It’s our time to have wage equality once and for all and equal rights for women in the United States of America!" the actress proclaimed.

It was the Oscars moment that caused Meryl Streep to jump out of her seat, jab her finger in the air, and scream, “YES!” over and over again.

The 87th annual Academy Awards had reached a critical lull in the proceedings. But the snooze-worthy broadcast was momentarily salvaged by journeywoman actress Patricia Arquette, who delivered a rousing speech upon accepting the Best Supporting Actress Oscar for Boyhood.

First Arquette thanked her fellow nominees, the cast and crew of the 12-year project Boyhood, and her friends and family, “who all work so hard to make this world a better place.”

Then she brought the house down.

“To every woman who gave birth, to every taxpayer and citizen of this nation, we have fought for everybody else’s equal rights,” shouted a fiery Arquette. “It’s our time to have wage equality once and for all and equal rights for women in the United States of America!”

The entire place—Streep and seatmate Jennifer Lopez included—rose to their feet for the night’s biggest standing ovation.

Last month, Senate Republicans effectively killed off the Colorado Pay Equity Commission when they used a Party-line vote to prevent renewing the Commission. Senate Republicans' skill for poor timing brought more attention to the issue; the vote against the Commission came one day after new numbers from the U.S. Bureau of Labor Statistics showed that women on average will earn about 77.9% of what men earn. State Rep. Jessie Danielson (D-Wheat RIdge) has since announced her own legislation (HB-1133) to continue the work of the Pay Equity Commission.

If you're wondering why anyone would be opposed to pay equity for women, well, you're not alone. But by 11:00 this morning, conservative activist Jessica Peck had already published an Op-Ed in the online version of the Denver Post in which she said…this:

Time and again, studies and data and antecdotes show that we do have gender equality in the United States. That is, when women act like men, we make as much or more money than men. Here's what we have to do: leave our babies in the hands of others and immediately return to work post-birth; leave our elderly parents in the hands of others to age — and die — so we can work; and aggressively negotiate salary and wage increases…

…Now, let's negotiate wages like the boys and we've got the rest covered. I run my own business. It's tough at times, but never have I ever had a male client suggest I should demand a lower wage just because I'm a girl. [Pols emphasis]

Uhh, come again? Does Peck want to be paid a lower wage because she is a woman?

Arquette's speech should only bring more attention to Rep. Danielson's legislation, and it's going to make a House vote on HB-1133 pretty interesting. Democrats can pass this bill out of the House on their own, but how could any Republican in an even halfway competitive district go on the record with a 'NO' vote now?