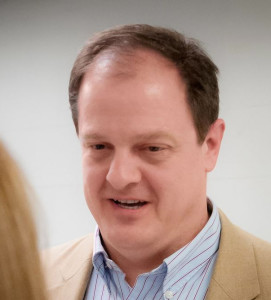 Pfaff says he helped "spawn the 'Liberty Lineup' of local shows which now dominate the station." KLZ now has local shows interspersed throughout the day, whereas Pfaff's show used to be the only local talk program. Pfaff left the KLZ airwaves after three years in 2011 to become chief of staff for Rep. Tim Huelskamp of Kansas.

I asked Pfaff, who's never held elected office before if his "Jim Pfaff Show" experience gave him any insights that proved useful in politics.

"It helped me really expand my communications knowledge and skills," he told me via email. "It's a great way to learn what messaging is important to people and caused me to look more deeply and accurately at issues. It was a natural extension of my political activities."

Pfaff has been involved in numerous political campaigns and he founded the Colorado chapter of Americans for Prosperity.

But he's probably best known for spearheading Focus on the Family's 2006 efforts to pass Amendment 43, which banned gay marriage in Colorado. At the time, he directed Colorado Family Action, the political arm of Focus on the Family.

When voters approved the amendment–and simultaneously defeated a measure allowing civil unions–Pfaff told The Denver Post, "Coloradans are fair, but they have no intention of installing gay marriage or any counterfeit to marriage. This vote makes that clear."

Pfaff isn't the only conservative activist in Colorado who's jumped to talk radio and worked in politics. Jimmy Lakey, who hosts a morning show on KCOL 600-AM in Ft. Collins, ran for Congress in Colorado Springs. After he left office, Rep. Tom Tancredo hosted a show on KVOR in Colorado Springs. KVOR's Jeff Crank was almost elected to Congress. KLZ's Ken Clark was just elected Second Vice Chair of the Denver Republican Party.