Colo. Unemployment Dropped More Than Any Other State in 2014 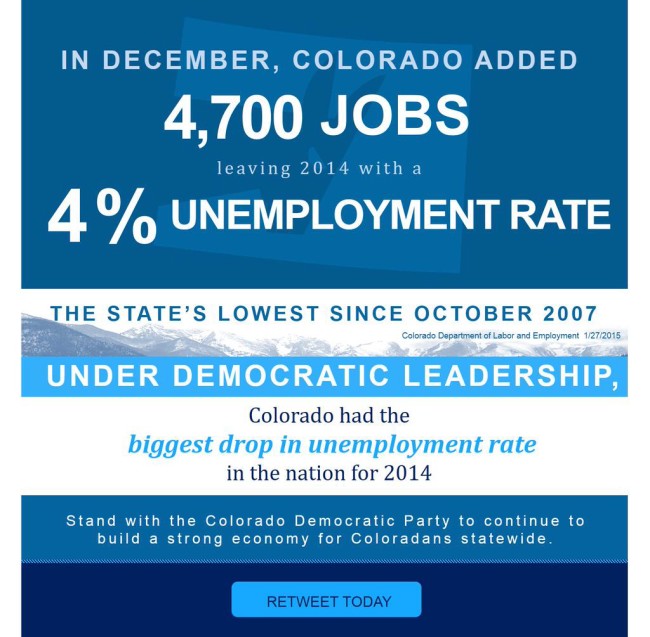 Good news for Colorado, as the Denver Business Journal reports:

Colorado added 4,700 payroll jobs in December and finished 2014 with an unemployment rate of 4.0 percent, the state's lowest since October 2007, the Colorado Department of Labor and Employment reported Tuesday.

The state's private-sector employers added 5,500 positions to their payrolls in December, while government jobs declined by 800 from November levels, the monthly CDLE report indicated…

…A separate survey of Colorado households, which does include those job categories, is used to estimate unemployment rates and the size of the labor force.

That survey showed Colorado's unemployment rate having dropped for nine consecutive months. December's 4.0 percent rate was down a tenth of a percentage point from November and down 2.2 percent from December 2013.

Improving Colorado's economy was the major theme of Gov. John Hickenlooper's re-election campaign in 2014, and the numbers certainly validate that strategy. Sure, there are plenty of different reasons why unemployment is falling so quickly in Colorado, but no matter how you look at it, this is a big talking point for Democrats. Colorado's unemployment rates dropped faster than any other state in the country in 2014, at a time when Democrats controlled the legislature and the Governor's office.