Not a good start 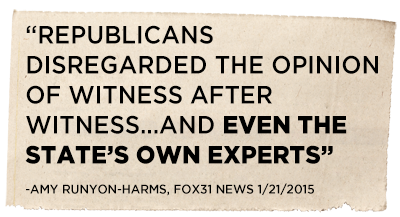 The 2015 legislative session in Colorado got off to a slow start–but yesterday, the new right wing majority in the Colorado Senate showed everyone their true colors.

In just one day, conservatives in the Colorado Senate did a shocking amount of damage. The state's Pay Equity Commission, which was working to outline best practices to make sure women and men receive equal pay for equal work, was effectively killed in a senate committee. Conservatives also killed a study looking into election modernization systems, another step in their long campaign to make it harder to vote. Another common-sense bill to make sure Colorado's civil unions law works was killed by anti-LGBT Senate Republicans.

Neglecting basic responsibilities and pandering to the far right is not what Senate President Bill Cadman promised he would do. Sign our petition now demanding the Colorado Senate majority stop killing legislation vital to Colorado's economy, voting rights, and basic fairness.

It could get worse. Dozens of great bills are set to be debated in the Colorado Senate in the next few months: relief for credit card holders, student borrowers, families who need child care, and many more. These bills deserve a fair hearing, not to be killed in committees stacked with conservatives before ever reaching the floor of the Senate.

Sign our petition now: tell Bill Cadman and the Colorado Senate Republicans to give every bill a fair hearing.

Three years ago, we watched as another slim Republican majority in the Colorado House broke the rules to kill the 2012 civil unions bill. It took another election, but they lost their majority and civil unions became the law of the land.

If that's what Bill Cadman wants for the Senate, so be it–but here is their chance to do the right thing. Tell Cadman now: give every bill a fair hearing in the Senate.

Thanks for standing up. If we work together instead of against each other, we can make the voters of Colorado proud. That's all I want this legislative session.