Gov. Brownback backs down and calls for tax increases – Are the Republicans in Congress Listening? 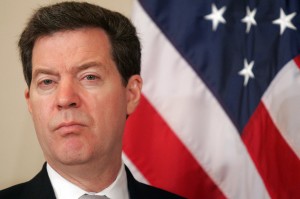 Wow, after years of reckless tax cuts covered over by the now completely discredited notion, known as the Laffer Curve, that reducing taxes will automatically generate increased economic activity and correspondingly the government bank account will overflow with new revenue, Gov. Brownback has reversed course and yesterday called for Kansas to increase taxes, including a 79 cent per pack increase in the cigarette tax, raising the tax on other tobacco products from 10% to 25%. The tax on beer, wine and liquor would jump from 8% to 12%. The intent is to close, in part, the looming $710 million deficit over the remainder of this fiscal year, which ends on June 30th, and the next fiscal year. However, even these tax increases are only expected to raise $394 million. To make-up the difference, he intends to slow down the pending income tax cuts but remains committed to his goal of eliminating the income tax. In his state-of-the-state address Thursday, he attempted to posture his tax increases as taxes on consumption (which is now apparently OK) as opposed to taxing productivity; but the bottom line remains the same.His experiment has failed, completely. The Laffer Curve doesn't work.

President Reagan tried it in 1981 with a 25% across the board reduction in federal corporate and personal income taxes and the federal deficit exploded.

Just over a decade ago, George W. Bush was inaugurated President and inherited an $800 billion annual surplus. He decided to drastically cut taxes making the same assumption that Reagan had and the one Brownback made four years ago that huge tax cuts would drastically stimulate economic activity and generate even more tax revenues than the government collected before the tax cuts. What happened? The annual deficit exploded and the promise of increased tax revenues turned out to be a mirage.

Besides Brownback's failed experiment what else has been going on in states controlled by Republican governors and legislatures? Lets look at the Republican nirvana called Wisconsin. Gov. Walker and the Republican dominated state house and senate cut taxes again making the same assumptions as Reagan, W, and Brownback and what happened. Wisconsin is now staring a $2 billion deficit in the face. One Republican leader in the Wisconsin House said he just couldn't understand why state revenues did not increase as expected. Its hard to believe someone who has been paying attention, for even a nano second over the past thirty-four years, could say that. The Laffer Curve is a hoax and a failure.

But, right now, what is happening in Arizona? The new Republican governor of that state, who served a term as state treasurer, has announced that he is going to fix the $500 million deficit this year and the looming $1.1 billion deficit next fiscal year by, you guessed it, cutting taxes because of course that will generate huge revenue increases and the state will have more funds than ever to pay for public programs. He hasn't announced what that is going to do to tuition at U of A or ASU or the other public institutions of higher education or the highway/infrastructure budget but with a state constitution requirement for a balanced budget, we can all guess what is going to happen. In fact, it isn't a guess, it is certain the Arizona state budget can't be balanced unless there are crippling cuts to major state services. But of course iron-clad ideology dictates the sky is green, even though everyone, including Republicans, whether they admit it or not, can see it is blue. The Republican Party and its candidates need to start dealing with facts instead of promoting failed ideas.

The other question is whether the Republicans in Congress are watching and listening. Oh, by the way, calling it "dynamic scoring" won't change the results.