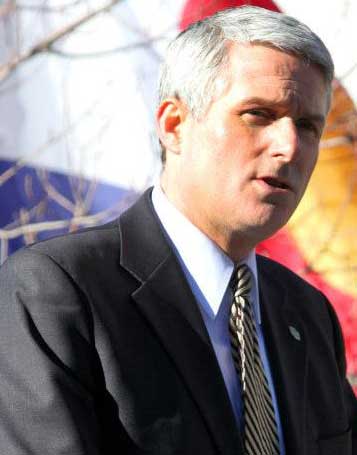 Heck, you might have trouble finding a politico anywhere in Colorado who isn't already backing the two-term CU Regent. Carrigan also has the support of Boulder County District Attorney Stan Garnett, as the Boulder Daily Camera reports:

Like Garnett, Carrigan has a diverse resume that includes being a prosecutor, working in private practice and serving as an elected official in education. Also like Garnett, if elected Carrigan would take over an office that's been run most recently by career prosecutors.

"Overall, I think (Denver) is a very good office with a lot of really terrific lawyers, but every now and then it's healthy to bring in somebody from outside an office and have them look at everything top to bottom," Garnett said. "What I tried to do was make changes I thought were needed and make them in a way that was respectful of the traditions and culture of the (Boulder DA's) office, and I think Michael could do that in Denver."

The City of Denver holds its regular municipal election in May, but because District Attorney is technically considered a state race, Carrigan will be campaigning through November 2016. Since Denver is a Democratic stronghold, this race will essentially be decided in the June 2016 Democratic Primary. That's still a good 18 months away, but there's good reason for Carrigan to be planning so far ahead.

There may be no other office in Colorado that opens up as infrequently as District Attorney. Consider: term-limited Denver District Attorney Mitch Morrissey was first elected in 2004, the same year that Salazar won his seat in the U.S. Senate. Morrissey was easily re-elected in 2008 and 2012 (you can serve 3 terms in Denver), but over the same period of time, Colorado voters have selected 3 different U.S. Senators. The next Denver DA will be only the third person to hold that office this century (Bill Ritter served as Denver DA through 2004).

State Rep. Beth McCann, who lost the 2004 Democratic Primary to Morrissey, quietly announced her own campaign for Denver DA last week (Lynn Bartels of the Denver Post has both announcements here), but she'll have a hard time just catching up to Carrigan at this point. Endorsements do not decide the outcome of political races, of course, but it's difficult to see where McCann or another challenger is going to gain a real foothold of support when you look at the list of people behind Carrigan already. Carrigan should raise plenty of cash for his campaign as well, and is reportedly willing to contribute a significant amount of personal money toward the cause.

A lot can happen in 18 months, but getting off to an early start is critical in a race such as Denver DA; anybody else who is thinking about making a run had better make a decision very soon.