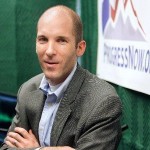 The Hill reports on the latest venture for local liberal operative Michael Huttner of Boulder, whose exploits in Colorado politics over the last decade are the stuff of political stuntman legend:

Melanie Sloan, the founding executive director of the Citizens for Responsibility and Ethics in Washington (CREW), is teaming up with Michael Huttner, the founder of a state-based progressive communications network called ProgressNow. It has more than 3.4 million members in 23 states.

In an announcement, Sloan and Huttner said their firm will specialize in “crisis and disruption strategies.”

“After more than 20 years in public service, the last 12 years running CREW, I am excited to open a new firm specializing in crisis and disruption strategies,” Sloan said. “I also am thrilled to be partnering with Michael Huttner, a creative and tireless advocate.”

Michael Huttner is an accomplished political strategist and communications expert, most recently involved in the successful re-election of Colorado Governor John Hickenlooper. Huttner is also the founder of ProgressNow, a network of state-based communications organizations with more than 3.4 million members in 23 states.

As the founder of ProgressNow, Huttner's aggressiveness going after local conservatives made him a feared component of the "Colorado Model"–the issue advocate and political comms alliance that helped flip the state solidly blue between 2004 and 2010. More recently, Huttner has worked with nationally focused committees like the House Majority PAC, as well as outside groups working to support John Hickenlooper in Colorado last year.

Safe to say, the combination of Huttner and Melanie Sloan of CREW fame is not one we'd want to oppose.