(Okay, this is funny – Promoted by Colorado Pols) 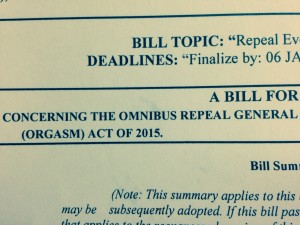 DENVER – Newly elected President of the Senate Phil Radman announced today that his first bill of the 2015 legislative session would repeal everything passed in 2013, and possibly provide unexpected "benefits" for his friends in Colorado.

Senate Bill 15-001, also known as the Omnibus Repeal General Assembly Statute Mechanism (ORGASM) Act of 2015, seems ambitious by most measures. The legislature passed 441 bills in 2013, from controversial measures on guns, grass and gays, to all those other bills nobody ever read about in the news, to sort-of essentials like the School Finance Act and the Long Bill. Can we expect a happy ending?

"First and foremost, it's…oh wait, I'm supposed to lead off with jobs," said Radman. "But let's face it. Everyone expects us to try to repeal all that junk from 2013 anyway, so why not just do it all with one bill? The ORGASM Act will eliminate all that useless foreplay and trying to 'please' (holds up fingers as air quotes) everyone, and basically get the whole thing over once we get what we 'came' for. Limited government, and oh yeah, this bill more or less guarantees jobs for everyone."

No Senate Democrats showed up for Radman's press conference, and attempts to reach them for comment were as fruitless as a peach tree in winter. Staffers and aides dished up excuses for their bosses – "still drunk after seeing the 2014 election results," "analyzing congressional polling data for 2016," and "why should they even show up to vote this year?"

So, the 4-person Capitol press corps peppered Radman with probing inquiries. "Didn't I see once on Twitter that we got more jobs after 2013?" "SB-1 seems to kinda test the boundaries of single-subject, don't it?" "Where we going for lunch, Phil?" "Why is this bill so damn long? Do we have to read it?"

"Let me answer those annoying questions the way I feel," said Radman. "I predict the floor chair won't find any 'problems' (air quotes again!) with single-subject, and our buddy Guesser will be back as a private-sector lawyer soon anyway, in case old Gooseflesh wants to file another frivolous lawsuit for the Democrat Party. And since I know all your bosses, it might be in your best interests to, let's say, back off a little on this bill. See, I just saved four jobs! Bueller?"

Oddly, the next day's front page headline was a perfectly accurate representation of what happened at the press conference. "RADMAN: G.O.P. SPELLS JOBS." The jubilation spilled over to the editorial pages – "here's proof that good things happen when we get rid of career politicians and replace them with outsiders like Phil Radman…," "we believe zero percent unemployment, or even better, just became attainable in Colorado…," and "the Governor's only reasonable response is to bring the House in line with this visionary bill…"

But there was one troubling piece of employment news associated with Senate Bill 1. At least three Capitol bill drafters reportedly resigned after attempting to write and edit the enormous and explosive ORGASM Act by its introduction deadline.