On Friday's "Pray In Jesus Name" program, Gordon Klingenschmitt was trying to make the case that male-on-male sexual assault in the military has increased as a result of the repeal of Don't Ask, Don't Tell and, in doing so, pointed to former Petty Officer Third Class Brian Lewis, who testified last year about having been assaulted when he served in the Navy.

Of course, the assault against Lewis took place back in 2000, more than a decade before DADT was repealed, so we are not sure how that helps to prove Klingenschmitt's point. Nonetheless, he demanded that the military reinstate DADT in order to push gay people "back in the closet, [Pols emphasis] especially if they're so flagrant that they want to violate one another when they're openly serving." 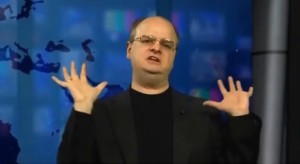 In the just-released January 2015 issue of GQ magazine, there's a freshly updated list of "America's 20 Craziest Politicians"–updated, we assume at least in part, because Gordon "Dr. Chaps" Klingenschmitt has won his election to represent Colorado Springs in the Colorado General Assembly. Coming in at #8 in this national list of political freaks and ghouls, here's what GQ has to say about the Colorado GOP's new unwanted poster child:

Has repeatedly bragged about performing a gay exorcism (he's a former Navy chaplain) to rid a woman of "the foul spirit of lesbianism," and also tried to perform a long-distance exorcism on President Obama because of something about the NSA. Believes that Obamacare "causes cancer" and that Obama's former FCC chairman was driven by the Devil to "molest and visually rape your children."

"Father in Heaven, we pray against the domestic enemies of the Constitution, against this demon of tyranny who is using the White House occupant, and that demonic spirit is oppressing us."

Calls himself Dr. Chaps, which is not the least bit creepy.

How crazy? That crazy, America! Our readers know all about "Dr. Chaps," but each new segment of the American public introduced to him gets to experience the rude shock all over again. It remains bewildering to us how much national coverage "Dr. Chaps" is getting–while the local media basically ignores Klingenschmitt, and the fact that he won his election by almost 70% of the HD-15 vote.

But in January, Honorable Representative Klingenschmitt will be harder to ignore.