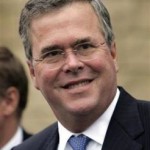 Columba and I are so proud of the wonderful adults our children have become, and we loved spending time with our three precious grandchildren.

We shared good food and watched a whole lot of football.

We also talked about the future of our nation. As a result of these conversations and thoughtful consideration of the kind of strong leadership I think America needs, I have decided to actively explore the possibility of running for President of the United States.

In January, I also plan to establish a Leadership PAC that will help me facilitate conversations with citizens across America to discuss the most critical challenges facing our exceptional nation. The PAC’s purpose will be to support leaders, ideas and policies that will expand opportunity and prosperity for all Americans.

In the coming months, I hope to visit with many of you and have a conversation about restoring the promise of America.

Ernest Luning at the Colorado Statesman reports that Jeb Bush is a (very) preliminary favorite among Colorado Republicans too, having won an informal preference poll last week at the Lincoln Club of Colorado's holiday party.

A Jeb Bush run for President in 2016 could prove interesting for Colorado, for more reasons than the prospect of a Clinton vs. Bush rematch for the job of leader of the free world. As a first cousin and close confidant of the Bush family, Colorado Treasurer Walker Stapleton's viability as a candidate for the U.S. Senate next election, which he is widely rumored to be considering, could be greatly boosted or damaged by Cousin Jeb at the top of the ticket. It's tough to say today which effect it would have, though we note that Stapleton has carefully avoided mention of his Bush family ties in both of his campaigns for office. That makes sense when you consider Stapleton first ran for office when "Bush fatigue" was much fresher in voters' minds.

But perhaps 2016 will be the year Walker Stapleton finally owns the Bush family brand?