Gumming Abortion To Death, Part II: Joke’s On You, Ladies 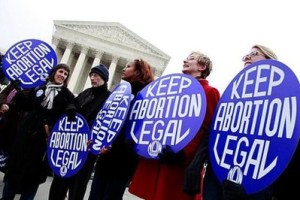 One of the central issues of the 2014 elections in Colorado was the battle over abortion policy–both at the federal and state levels, where GOP U.S. Senate candidate Cory Gardner outlasted months of withering attacks on the issue, and voters again rejected a "Personhood" abortion ban ballot measure. Colorado has a long history of support for women's reproductive rights, and the lopsided margins by which Personhood has been defeated here in recent years have made the issue toxic for Republican politicians who used to proudly campaign on their support for banning abortion.

In 2014, however, Republicans successfully blunted the issue of abortion in Colorado–more than that, they managed to turn the debate back on Democrats, successfully countering that liberal "social issue warriors" were wrongly obsessing about a non-issue. Conservative go-to foil on women's issues Laura Carno wrote an op-ed suggesting that the entire question of abortion rights in this year's elections was overblown–declaring flat-out, despite the many avowedly pro-life GOP candidates on the ballot, that Colorado womens' "right to an abortion is not in jeopardy." In the Denver Post's endorsement of Cory Gardner, they claim with no supporting evidence whatsoever that "Gardner's election would pose no threat to abortion rights." Next month, one of the GOP-controlled U.S. Senate's top priorities is a 20-week abortion ban.

In 2006, Republican gubernatorial candidate Bob Beauprez promised to sign an abortion ban in Colorado that would make no exceptions even for cases of rape or incest, and was happy to explain in detail exactly why he thought that was the right thing to do. This year, Beauprez's message on abortion was a complete about-face: "I respect people's opinion, women's right to that choice."

Because Beauprez was defeated, and Democrats retained at least partial control of the state legislature, the question of what Republicans in full control would do on abortion isn't going to be tested here. But what's going on elsewhere, in the wake of the GOP's huge gains in state legislatures across America? As Politico's Paige Cunningham reports, all that stuff you heard before the election about abortion rights not being in jeopardy–it's simply not true.

The big Republican gains in the November elections strengthened and enlarged the anti-abortion forces in the House and the Senate. But it’s the GOP victories in the statehouses and governor’s mansions that are priming the ground for another round of legal restrictions on abortion…

Abortion rights advocates have had setbacks in the states for several years, with a surge of legislative activity since 2011. [Pols emphasis] Women seeking abortions may face mandatory waiting periods or ultrasound requirements. Clinics may face stricter building codes or hospital admitting privilege rules they can’t satisfy. Dozens of clinics have shut down in multiple states. Texas, for instance, has fewer than 10 abortion clinics now. A year ago, it had 40.

Republicans now hold two-thirds of the state legislative bodies, after winning control of 11 more chambers. They completely control the legislature in more than half the states, adding Nevada, New Hampshire and West Virginia to that list earlier this month. And they gained two more governor’s seats, so they will hold 31 next year.

Steady Democratic control of Colorado in recent years means we haven't seen the same kinds of proposed restrictions on abortion that have passed in many other states, and the ones that have been introduced have been defeated with enough fanfare to render them political liabilities for Republicans. Despite this, 2014 marked the greatest challenge to Democratic control by Republicans since Democrats took the legislature in 2004–and before the ballots were fully counted, Republicans had a few glorious moments when control of the Colorado House, Senate, and Governor's Mansion were all at least hypothetically in reach.

Today, even with Republicans only in narrow control of the Colorado Senate after last month's elections, a program credited with reducing teen pregnancy by 40% is already in jeopardy. Without more power, there's not much that Republicans in Colorado can do legislatively to further restrict abortion and contraception access–but now that the election is over, it's time to recognize that the downplaying of abortion by the GOP and accommodating local media was enormously deceptive. The truth is, restrictions on reproductive choice are passing across the nation–and if Republicans had taken control of this state as they did so many others in the last two midterm elections, restrictions on abortion rights could well become law in Colorado too.

In that event, a lot of local pundits and media types would owe you an apology.