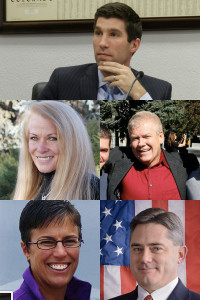 The biggest surprise for Democrats might be the Senate Education Committee, where some of the chamber’s most conservative Republicans are assigned. In other words, this is not a teachers union friendly crowd.

That, folks, is an understatement. This may not be a crowd "friendly" to unions, teachers…or students?

Where to start? Owen Hill is a stridently conservative and ambitious legislator, and with Chris Holbert arguably the least gaffe-prone of the bunch. But with Laura Waters Woods, Tim Neville, hard-right brother-in-law of Jefferson County school board member Julie Williams, and especially Vicki "Where's The Mute Button" Marble rounding out the Republican majority on this committee, Senate Education just became the go-to venue for Democratic trackers looking for embarrassing clips. Neville and Woods, you'll recall, even sent out campaign mailers that doctored the signs of Jefferson County student protesters. Wouldn't it be smashing to have one of those students show up to testify before this committee?

Of course, the ability to actually carry out whatever their education agenda might be–like the GOP-controlled Senate generally–is attenuated by Democratic control of the House and Gov. John Hickenlooper. But the choices made by GOP leadership to staff this committee to do not bode well for "working with our Democratic colleagues to build a better Colorado," as GOP Majority Leader Mark Scheffel claimed in his release.

And that, again, may be an understatement.