There is an effort underway in Denver to re-establish a degree of residency requirement that may appear on the May 2015 ballot. This is a stupid idea, for reasons that we'll explain in a moment. But first, we'll let Jon Murray of the Denver Post explain the trumped-up controversy:

Denver voters long ago repealed a requirement that city workers live within city limits, but a group of residents is working to revive the rule for mayoral appointees.

They're aiming to place a charter amendment on the ballot for next May's municipal election, when Mayor Michael Hancock is up for re-election...

…For about 20 years, landlocked Denver had the rule for all city employees, from top political appointees to janitors.

But in 1998, Denver voters decided, 58 percent to 41 percent, to expand the residency rule significantly, allowing city employees to live not only in Denver, but also in six nearby counties. 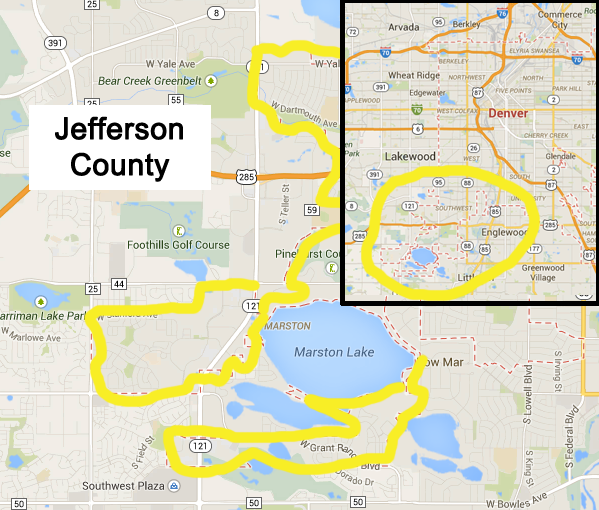 You’re not in Denver anymore. Or are you?

The editorial board of the Denver Post weighed in over the weekend, calling the residency requirement "a step too far" and "unnecessary," and we wholeheartedly agree with this sentiment. We have no problem with requiring elected officials to live in the area in which they seek to represent, but there's a good reason that Denver scrapped this requirement for city workers in general.

Denver's City and County boundaries evolved in a weird way over the last century, which you can see from the map at right. There are official Denver tentacles that stretch wayyy outside reasonable boundaries, with little pockets of the City and County existing as municipal islands in the middle of Jefferson County.

The reason that Denver County juts well past Sheridan to the Southwest is because old residency requirements once required all city employees — including those working for the fire and police departments — to live within official Denver boundaries. As Metro Denver grew into the vast sprawl that exists today, many of these Denver employees wanted to move into newer, and more affordable, developments popping up in nearby unincorporated Jefferson County.

As a workaround solution so that Denver employees could keep their jobs and their new homes, odd sections of land were annexed into Denver — the metropolitan mountain moving to Muhammad, to borrow a phrase. This is a middle finger to the entire argument in favor of residential requirements, which is the idea that City and County employees will be more attuned to the needs and desires of Denver so long as you extend a boundary on a map.

Today, these neighborhoods are so far removed from the City and County of Denver that residents spend most of their lives (and money) in Jefferson County, even if their property taxes go somewhere else. Denver residents wisely voted to drop the requirements in 1991, but now some folks want to reestablish these requirements for mayoral appointees for petty reasons. This is a slippery slope that can quickly become problematic as more and more levels of local government get obsessed with the relevance of residency. Employees of Jefferson County are not required to live within the county boundaries, nor should they be. We can only imagine how it would stifle diversity if we required all government employees to live in specific areas.

The Denver Metropolitan Area is more than just the boundaries of its capitol city…and that's a good thing. If you don't like a particular mayoral appointee, then you can take it up with the Mayor's office; requiring an employee to move into the dotted-line sections of a map isn't going to change anything.