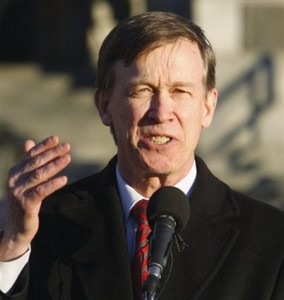 “John Hickenlooper has played an important role in achieving several conservation gains during his time in the Governor’s office. He signed a number of important pieces of legislation into law including increasing Colorado’s renewable energy standard and championing first in the nation air protections to reduce ozone pollution and directly reduce methane pollution from oil and gas facilities. The Governor and his staff also engaged productively in discussions regarding protections of critical open space and wildlands like the Thompson Divide and sage grouse habitat in Northwest Colorado…

We have had disagreements with Governor Hickenlooper over policies of his which have put the interests of the oil and gas industry over the health and environment of Coloradans. Even given those differences, it is the case that under a Governor Hickenlooper administration, Colorado’s air, land, water, and our open spaces have a much greater chance of being protected than if Bob Beauprez were governor. [Pols emphasis] We also believe Governor Hickenlooper will do a significantly better job of promoting our State’s leadership in clean wind and solar energy than Beauprez would.

Conservation Colorado endorses Governor Hickenlooper and we look to the Governor to lead in his second term on the most pressing environmental issues of the day – climate change and safeguarding what we love about Colorado – clean air, water, scenic opens spaces and our unique quality of life.”

Though it's not unexpected, the endorsement of Conservation Colorado is very important to Hickenlooper for shoring up the Democratic base ahead of the November elections. It's no secret that Hickenlooper's relations with environmentalists have not been a strong point. With that said, Hickenlooper can credibly point to agreements like the Air Quality Control Commission's new emissions rules, and the compromise brokered with Rep. Jared Polis to work on legislation aimed at enhancing local control of oil and gas drilling. These and other examples from Hickenlooper's first term show a different side of the proverbial coin: when Hickenlooper's ability to bring opposing parties to the table was key to making any kind of progress.

Recognizing that this may not be quite enough for all of their constituents, Conservation Colorado invites you to consider the alternative:

Coloradans face a clear choice. The Governor’s opponent, Bob Beauprez, has returned to his extreme right wing roots promoting an anti-conservation, anti-clean renewable energy agenda. Beauprez has stated that climate change is a hoax, he has mocked efforts to address citizen concerns around drilling and fracking, and he supported a failed referendum to boost transmountain water projects that would have further damaged Colorado’s rivers and streams. Disturbingly, Beauprez has recently aligned himself with far right wing, anti-government ideologues who are calling for the state to seize control of America’s public lands. This is a costly proposition for the State and could fence off Coloradans from areas they have long enjoyed for camping, fishing, hunting, and hiking.

When the question is between someone who agrees with you 80% of the time or not at all, the answer is pretty simple.