Students Walk Out Across Jefferson County 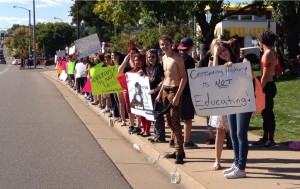 The backlash against the new right wing Jefferson County Board of Education's proposed "curriculum review committee," intended by conservative board members to ensure the district's history courses promote "citizenship, patriotism, essentials and benefits of the free enterprise system, respect for authority," and "presents positive aspects of the United States and its heritage," continues today as hundreds of students walked out of Jeffco high schools in protest. As the Denver Post's Jesse Paul reports:

The walk-out followed a similar protest Monday by at least 100 Evergreen High School students who left classes to voice their opinions at the county's school administration building. On Friday, two county schools closed after 50 teachers either called in sick or used a personal day.

Tensions have been mounting in the school district as students and teachers push back against district leadership. Community members are angry about an evaluation-based system for awarding raises to educators and a proposed curriculum committee that calls for promoting "positive aspects" of the United States and its heritage and avoiding material that would encourage or condone "civil disorder, social strife or disregard of the law."

A slate of conservative candidates took control of the board last year and hired a new superintendent, Dan McMinimee, to replace the veteran Cindy Stevenson. Stevenson resigned and left earlier than planned, saying her work was being impeded by the board majority.

These highly visible protests, just a few months after similar protests of the hiring of Douglas County's Dan McMinimee as the district's superintendent but by all accounts much larger, pose a considerable and unforeseen political risk to Republicans in Colorado's electoral bellwether population center. The connection between the conservative board majority proposal to "examine" history curriculum with openly political goals and Republicans on the ballot in Jefferson County is very easy to draw. The close family ties between board member Julie Williams and Republican SD-16 candidate Tim Neville are a matter of record, as well as extended ties between Williams and Rocky Mountain Gun Owners-endorsed Jeffco legislative candidates like Tony Sanchez and Laura Waters Woods.

Bottom line: the Jeffco board's history curriculum review proposal could well alienate independent voters from Republicans in Jefferson County and perhaps elsewhere. Even where one might not agree with Democrats on everything, something that looks like an attempt to manipulate public school instruction for political purposes is repellent in a way that crosses political lines. Outside a conservative diehard bloc that isn't troubled, this all seems terribly…

In a word, un-American.