Tim Neville Could (Still) Be in Serious Trouble 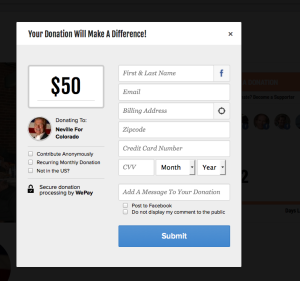 See the option for “contribute anonymously” on Neville’s fundly page? Yeah, you can’t do that.

UPDATE (8/19/14): According to a second letter sent to Tim Neville from Christopher O'Dell, questions remain as to what happened with all of the "anonymous" donors that appeared on his campaign website. Neville responded to the initial letter with a short email explaining that these anonymous donations were indeed accounted for in his campaign finance reports, but Neville has yet to get into detail about the more than 50 anonymous donations that had appeared on his Fundly.com campaign website.

As Eli Stokols reports for Fox 31:

Tim Neville, a Republican running for a Jefferson County state senate that could determine which party controls the chamber next year, has been accused of violating Colorado’s campaign finance laws — by a fellow Republican.

According to fundraising information linked publicly on Neville’s own campaign website, Neville has received around a dozen anonymous contributions exceeding the $20 limit, including one as large as $400.

Neville, who was appointed to fill the vacant District 22 seat in 2011 only to see his seat disappear during reapportionment in 2012 when he was drawn into S.D. 16, also appears to have received at least three contributions from individuals that exceed the $400 limit.

Campaign finance violations are, unfortunately, an all too-common occurence in Colorado politics, but there are two pieces to this story that could make Neville's troubles particularly concerning.

Neville is the Republican candidate in SD-16, challenging Democratiic Sen. Jeanne Nicholson in what we've said before is likely to be the single most competitive State Senate race in 2014. That means that Democrats have every incentive to pursue these violations as far as possible. This leads us to the second major problem for Neville — the more you follow this rabbit down the hole, the more curious it gets.

Neville appears to be openly floutting campaign finance laws by accepting – and encouraging  — anonymous donations, as well as for apparently accepting donations from individuals that far exceed the campaign finance limit of $400 per donor. Okay, so maybe these were just simple mistakes or clerical errors, right? Neville may wish it were only that simple.

Remember that Neville was a sitting state senator in 2012 (following the resignation of Sen. Mike Kopp) who was not able to run for re-election in 2014 because the boundaries of his district were re-drawn. Neville still campaigned and raised money until the final ruling of the reapportionment decision, so he’s no rookie candidate. Tim Neville does know better, and here’s where things get rough: According to reports made to the Colorado Secretary of State, there is no indication that any of these anonymous donations were ever received…yet there is evidence to suggest that Neville's campaign tried to adjust these reports to reflect the law later.

For example, the letter from O'Dell (NevilleLetter – PDF) notes that someone named Delores Kopp made anonymous contribution(s) to Neville for a total amount of $750. Obviously, this is well beyond the $400 campaign finance limit for State Senate. Curiously, Neville's campaign finance report notes a total of about $800 attributed out to various donors with the last name of "Kopp," including Delores Kopp. As you can see, this is a much bigger problem for Neville than advocating for anonymous donors (which, frankly, is pretty bad in itself). Where this rises from election-season complaint to potential front-page news is how so much of this money appears to have just…disappeared.

There’s a difference between “filing errors” and “deliberately misleading filing errors,” at least in the court of public opinion. We’ve no doubt that we haven’t heard the last of this case.