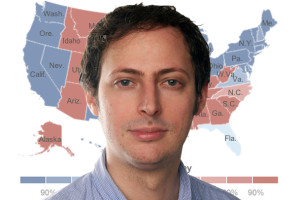 In one of his first posts since re-launching fivethirtyeight.com, Nate Silver picked Udall to win in the 2014 Colorado Senate Race, saying:

The GOP got the candidate of its choice in Rep. Cory Gardner, who declared for the race last month. That will prevent them from again nominating Ken Buck, the tea party candidate who lost a winnable race in 2010. (Buck has withdrawn from this year’s Senate race and decided to run for the U.S. House instead.) By our measures, Gardner is a decent candidate rather than a great one. He’ll start at a fundraising deficit to the Democratic incumbent, Mark Udall, who had $4.7 million in cash on hand as of Dec. 31, and he comes from a conservative district and has amassed a conservative voting record that may or may not translate well in the Denver suburbs. But Udall’s approval ratings only break even, and we give Republicans a 40 percent chance of winning his seat.

Silver went on to predict that the GOP had a slight advantage overall, with North Carolina rated as a 50-50 toss up and set to decide control of the Senate in 2015. He did urge caution though, as many of these races will shift significantly depending on the results of primaries.

Silver explains that the Senate elections in years like this (seats which last had an election during an open seat presidential year, like 2008), the opposition is expected to have a major advantage, which in this case, should be amplified by the ongoing GOP advantage in off-years. So the fact the Senate battle is shaping up to be an even split, with neither side a clear front-runner, is actually great news for dems.

But we'll have to wait and see once primaries in states like Alaska have been decided for a truly clear picture of where everything stands.

Silver's run down of the 36 Senate seats up for election this fall: