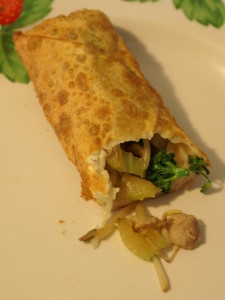 [Rep. Lori] Saine repeatedly told The Colorado Statesman that she brought the boxed chicken to simply supplement the meal provided to task force members. There is no definitive evidence to prove otherwise. It is simply a story of dueling accounts.

She said she was a “little shocked” that Call so quickly threw her under the bus.

Frustrated by Call’s criticism of the two conservatives, upset Republicans suggested that they bring boxed chicken to the central committee meeting. An email obtained by political reporter Lynn Bartels of the Denver Post apparently outlined 14 complaints with Call and the current direction of the party, while drumming up support for Baisley.

The email shows that it was sent from an account belonging to Lana Fore-Warkocz, secretary of the party, but she did not sign it, according to The Post. Fore-Warkocz says that the protest was not her idea, and that she actually encouraged people not to bring chicken…

Lana Fore-Warkocz, the secretary of the Colorado Republican Party who surfaced last week as one of the major instigators of a planned (but apparently abortive) protest against GOP Chairman Ryan Call, has many grievances including but limited to Call's criticism of Sen. Vicki Marble and Rep. Lori Saine. But above all, she's brilliantly kept the story of the GOP's culinary stereotyping alive:

Fore-Warkocz pointed out that she is half Asian, suggesting that Asian people are skinny because they eat healthier foods than other cultures. She doesn’t understand why dietary habits should be connected to a conversation on political correctness.

“My gosh, I’m Asian. If you want to eat egg rolls, go ahead,” said Fore-Warkocz. “I don’t get the political correctness, and I will not be politically correct.

“That’s why Asian people are skinny, because they eat lots of vegetables…” she continued.

To briefly recap, a few weeks ago, Sen. Vicki Marble spontaneously began rambling in a poverty reduction commission hearing about "problems in the black race" and "Mexicans" in America related to their diets. After Marble became the focus of nationwide criticism, Rep. Lori Saine half-wittedly attempted to defend Marble by bringing fast-food chicken to the next hearing of this commission. Rep. Saine made an absolute fool of herself by refusing to explain to a reporter what her point was, but clearly broadcasting with her peculiar behavior and wide grin that she had some kind of point in mind. GOP chairman Call quite rightly denounced Rep. Saine's antics, which resurrected a terrible story otherwise on its way to the memory hole.

Who's up for round three? Apparently there are still minority groups out there to offend.