It’s All One Big Joke To Jon Caldara

UPDATE: Gazette editor Wayne Laugesen hotly points out in a comment (below the fold) that Caldara probably didn't leave his minor children in the house he "leased to renters" in Boulder while he rented former GOP Rep. Mark Barker's guest bedroom in Colorado Springs. While that leaves unclear the location of Caldara's minor children while he "lived" in a Colorado Springs guest bedroom and fraudulently voted in the Senate District 11 primary, it's good to know the kids weren't in a house that has allegedly flooded.

But that doesn't legitimize Caldara's disregard for the law, or making a joke of the floods impacting the state today as a pretext for some too-clever-by-half legal defense. After all, "he can't be this far from his kids" is a pretty good reason not to "move away" in the first place. Which Caldara didn't really do, as stated in his own press release.

It never ceases to amaze us how stupid some people think you, meaning all of us, are.

Via Wayne Laugesen, editorial page editor of the Colorado Springs Gazette, we finally learn how Jon Caldara of the Independence Institute hopes to resolve the sticky legal predicament he finds himself in. As reported, Boulder resident Caldara voted in the Colorado Springs-area Senate District 11 recall a week ago, after affirming under penalty of perjury that a "week-to-week lease" of a single room in ex-GOP Rep. Mark Barker's house was now Caldara's "sole legal residence." This led to angry warnings from Gov. John Hickenlooper that such attempts to "disrupt the process" are unlawful, and a request for Attorney General John Suthers to get involved if necessary.

Well folks, we're embarrassed to even show you this, but here is how Caldara apparently plans to skate: 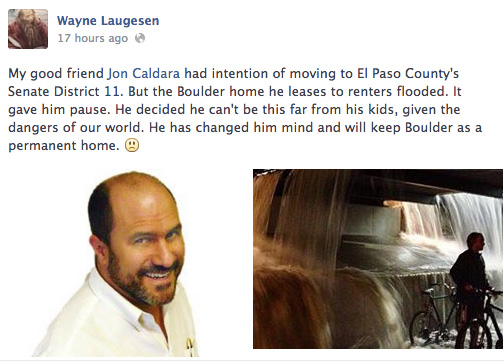 Convenient, albeit an insult to so many legitimately inconvenienced, or worse, by this week's massive flooding along the Front Range. This latest move raises many questions, of course, like why (or whether, see update above) Caldara would leave his children in a home he has "rented out" while he made a single bedroom in another city his "sole residence." But more than anything, we would kind of like to know if Caldara has any shame left. At all. Because whatever contrivance Caldara uses to effect his getaway from Mark Barker's guest bedroom, everyone reading this knows he never had any intention of making it his "permanent home."

Election fraud notwithstanding, Caldara should be grateful you can't be arrested for being a callous asshole.