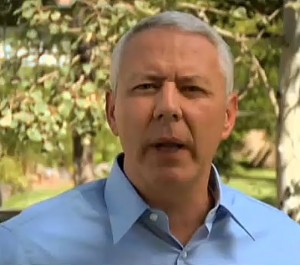 Can you blame him? A fundraising email blast from Sen. Mark Udall today:

In 2010, outside groups like AFP spent a combined $30 million to influence the Colorado U.S. Senate race. We have to be prepared to fight back…

It’s not just the Koch brothers and outside spending coming back to Colorado from 2010.

Now the media’s reporting that Ken Buck, Weld County district attorney and failed 2010 Republican nominee for U.S. Senate, is itching for a second shot at bringing his extreme views to the U.S. Senate. [Pols emphasis]

In 2010, the Year of the Tea Party, Buck blazed the trail for future extremists. Before Todd Akin explained his theory of “legitimate rape” in 2012, Buck told a rape victim she was simply experiencing “buyer’s remorse” and refused to prosecute her case.

While Buck’s views are outside of the mainstream for most Coloradans, it’s par for the course for today’s right-wing ideologues. And any Republican candidate will be helped by millions of dollars in outside money.

Although Weld County DA Ken Buck lost to Sen. Michael Bennet by a relatively small margin, the underlying demographics showing a collapse in support for Buck among women voters has been studied intensely by Democrats since 2010. Buck's defeat after a campaign focused on highly offensive remarks about a victim of rape whose case he refused to prosecute, along with other hard-line social issue positions Buck proudly took as a GOP primary candidate, has evolved into what's known nationally as the "Michael Bennet strategy."

If we were Mark Udall, we'd be talking about Buck a lot too. And privately, hoping.