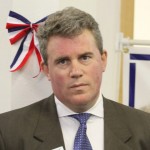 Keeping it in the family, the Denver Post's Kurtis Lee reports:

Republican Colorado Secretary of State Scott Gessler has hired an attorney with ties to his old law firm to file a bold court order against Gov. John Hickenlooper in an effort to force the governor to set election dates in the recalls of two Democratic state lawmakers.

In a writ of mandamus, filed in Denver District Court over the weekend by attorney Steven Klenda, Gessler asks for an “expedited/emergency hearing” because Hickenlooper, a Democrat, has “refused to perform his constitutional duty to set a date for an election to recall” Senate President John Morse, D-Colorado Springs, and Sen. Angela Giron, D-Pueblo…

Generally, Republicans believe that the Democrats’ strategy is to delay the process as much as possible.

Democrats, on the other hand, believe that Republicans want the election set before the end of summer — and the return of students at Colorado College, something that could tip the scales in an election.

That Gessler’s office would file suit has an obvious political subtext: Gessler is likely to challenge Hickenlooper for the governorship next fall.

The Post's Lee did note an important detail that Stokols missed, though it's obvious: Secretary of State Scott Gessler, a likely gubernatorial candidate in 2014, didn't use the Attorney General's office to file this suit. There are a few possible explanations for that, but the most obvious ones indeed make this appear to be politically motivated. That would, of course, be consistent with behavior from Gessler throughout the recall process.

The bottom line is that Gov. John Hickenlooper believes the "clock" mandating the setting of an election date per the state constitution should start after legal challenges are resolved, while those seeking to recall Senators John Morse and Angela Giron want it set as quickly as possible, regardless of the status of those legal challenges. In Morse's case, the students at Colorado College, located in SD-11, weigh heavily into both sides' strategy. Residence halls at Colorado College begin to open to students in late August, with classes beginning September 2nd. Morse needs those student voters–and Republicans need them to not be there.

There are two distinct issues in play here, but the common theme for Gessler appears to be pure political advantage: in the short run to help the recalls succeed, and in the long run to use the whole business against Hickenlooper in his gubernatorial campaign next year. We'll update as this story develops.