In Colorado, Women Got (Expletive) Done

This fascinating infographic from Emerge Colorado we were forwarded today makes the case: 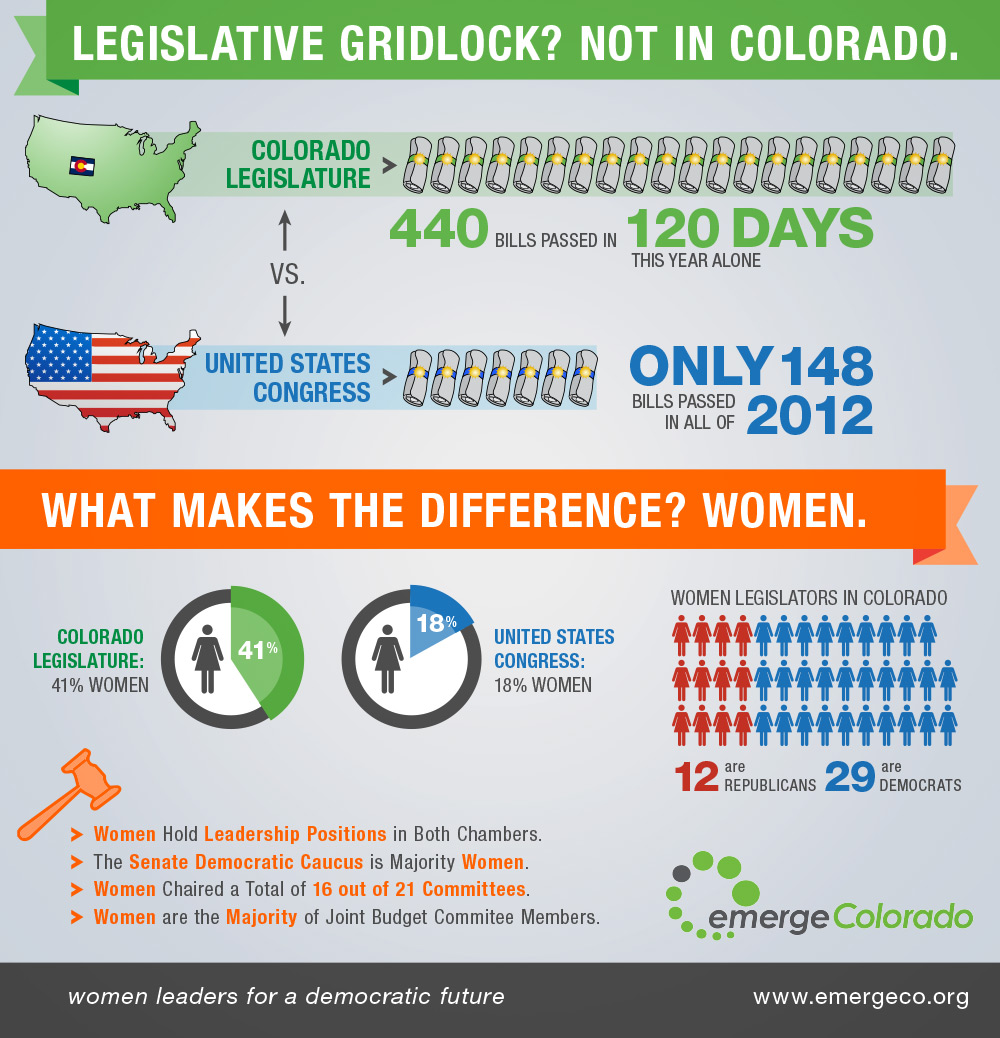 When you look at the important bills from this session a large majority of them were sponsored by women.  These include:  the Colorado Asset Bill led by Sen. Angela Giron and Rep. Crisanta Duran, gun safety bills led by Rep. Rhonda Fields Rep. Beth McCann, and Senator Evie Hudak, comprehensive sex education led by Sen. Nancy Todd and Rep. Crisanta Duran, a bill to connect wrap around support services to early childhood education led by Rep. Millie Hamner and Sen. Mary Hodge, and a bill extending the job growth incentive tax credit championed by Rep. Dianne Primavera.

The charge to pass legislation was led by women legislators. Some of the bills they championed and succeeded in passing garnered the most fanfare and some passed with little attention, but all will make the lives of Coloradans better.  The Colorado legislature was hugely productive and passed 440 bills in 120 days compared to Congress only passing 148 bills during the entirety of 2012. Specifically, Colorado women helped make our communities safer, a contrast to the gridlock we see in Washington.

Colorado far exceeds Congress in the percentage of women who serve; Congress is composed of only 18% women compared to Colorado’s 41%.  According to the Center for American Women in Politics, women tend to run for different reasons than men and have different policy outcomes as a result. Women focus more on policy goals than on power and prestige.  Women favor a leadership style of collaboration and consensus building.  As a result, on average, women sponsor and co-sponsor more bills than men and are able to enlist more co-sponsors.   Regardless of party women are, on average, 31% more effective at advancing legislation and see continued success farther into the legislative process than men…

The high proportion of women in the Colorado General Assembly has been a point of pride for a number of years, although recent attrition among Republican women (see: Jean White, B.J. Nikkel) have made the trend more of a Democratic talking point. Likewise with this year's historically productive legislative session, full of policy goals sought by Democratic women that were generally opposed by Republicans irrespective of gender.

Our legislature did make Congress look pretty dysfunctional though, and your mother would agree as to why.