So, Uh, What’s the Deal with Ken Gordon?

I’m Ken Gordon, and I may or may not be running for Secretary of State

Democrat Ken Gordon is currently the only Democrat registered as a candidate for Secretary of State in 2014, but is he really a candidate? It sure doesn't seem likely.

Since filing his paperwork in December, Gordon has done little other than try to raise money for Democrat Andrew Romanoff in his bid for Congress in CD (see a fundraising invitation from March after the jump, the second fundraising push Gordon made for Romanoff in Q1). The former State Senate Majority Leader lost an agonizingly-close race for Secretary of State in 2006, when Republican Mike Coffman emerged victorious by less than 2 points, and since that race he has largely devoted his time to a rather pointless (in our opinion) campaign to encourage candidates for office to eschew PAC money. Democrats are eager to take out Republican SOS Scott Gessler in 2014, and it was no surprise to see Gordon's name pop up as a candidate — but he has either lost interest or is waiting for something before he starts actually campaigning. 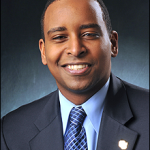 I’m Joe Neguse, and I may or may not be running for Secretary of State, too!

Gordon's campaign finance report from Q1 makes it clear how serious he is about running for SOS at this point. He has loaned his campaign $10,000, and is thus far the only contributor, writing a $1,100 check to open his campaign account in December. He has managed to spend $8,120.78, mostly on small administrative and staffing costs. Gordon's website, KenGordon.com, makes no reference to a potential 2014 campaign, and directs anyone interested in helping to focus their efforts on "getting big money out of politics" (though there is no link to his nonprofit CleanSlateNow.org).

Gordon is independently wealthy, so he has plenty of time to start working on a campaign warchest. We've heard, however, that Gordon is much more interested in helping Romanoff with his campaign than in running another race of his own. Perhaps Gordon was waiting to see if there would be a rush of interest in supporting his candidacy before he stepped out completely; more likely, he's deciding that being a full-time candidate for SOS doesn't interest him as much as he thought it would.

CU Regent Joe Neguse has long been talking about running for SOS, though he hasn't yet filed any paperwork to announce his intentions. In short, Democrats have two potential candidates for SOS right now: One has already filed and spent money on a "campaign," but doesn't seem particularly interested in running anymore. The other is reportedly interested in running, but hasn't filed paperwork or made any official movement towards forming a committee.

Meanwhile, Gessler has $33,717.54 in the bank for his re-election bid, but we continue to hear that it is likely he will run for Governor instead. So…whatever.

Something significant and exciting is happening in Colorado.

Big money is undermining our democracy in a profound way and it is everyone’s job to do something about it.  That means it is your job and mine. Below is an invitation to a fundraiser for Andrew.  Helping Andrew is the best way to fight against the selfish special interests that have turned Washington into an influence auction.

Please contribute what you feel is appropriate.

The insiders, lobbyists and influence buyers think you will never do anything to stop them.  Contribute to Andrew, either by coming to the event or by going to his website: http://www.andrewromanoff.com

This is something we need to do.  Supporting a candidate who doesn’t take this money is the best way to fight for democracy.

Please forward this email to anyone you know who would be interested in joining us or helping Andrew.

As always, do not hesitate to write back with comments or questions: ken@kengordon.com