The flier from that new group, which isn’t even registered with the state but lists its address as that of the Hackstaff Law Group, Gessler’s old firm, is a revealing microcosm, just the latest display of a ham-handed political operation on the right. [Pols emphasis]

Beyond the half-shade of separation between the group and the polarizing Secretary of State, the flier itself is almost ridiculous in its hyperbole, stating: “Felons, illegal aliens — even the deceased – could cast ballots!”

If that were the case, H.B. 1303 likely wouldn’t have the support of the Colorado County Clerks Associations, which represents roughly 75 percent of the state’s clerks, more than half of whom are Republicans…

While the bill makes several changes to voter registration laws, such as allowing for registering up to Election Day, it doesn’t change how those registrations are done and how voters are verified as eligible to cast ballots, Reiner said.

The flier, however, claims the measure would open the door to “illegal aliens” and the deceased to cast ballots.

“The reality of it is it still requires somebody to bring either their driver’s license, their Colorado ID or the last four digits of their Social Security number and it’s verified in our system,” Reiner said. “With the bill, that doesn’t change.”

…The measure has the support of nearly all county clerks in the state, most of whom are Republicans like Reiner. It is being pushed by the Colorado County Clerk’s Association and its executive director, Donetta Davidson.

Also, a commenter this morning appears to have identified something that, if true, is quite shocking and could add another ugly dimension to this story. If you look closely at the center of the second page of the mailing, at the photo of the voting line, you see two women who look strangely alike. A look at the original photo reveals what happened:

We're astonished to even report this, but it's undeniable: they have Photoshopped out the African-American woman in the original photo. They also appear to have removed an African-American man standing behind her (see photos in comments below).

In the ugliest off-year that anyone we know can remember in Colorado politics, it appears we have hit yet another new low–and this one just makes you shake your head, folks. The worst adjectives you can think of really might actually apply to the deplorable gutter politics on display here. Original post follows.

Sent to us this afternoon, as arriving in mailboxes throughout beet-red Mesa County this weekend: 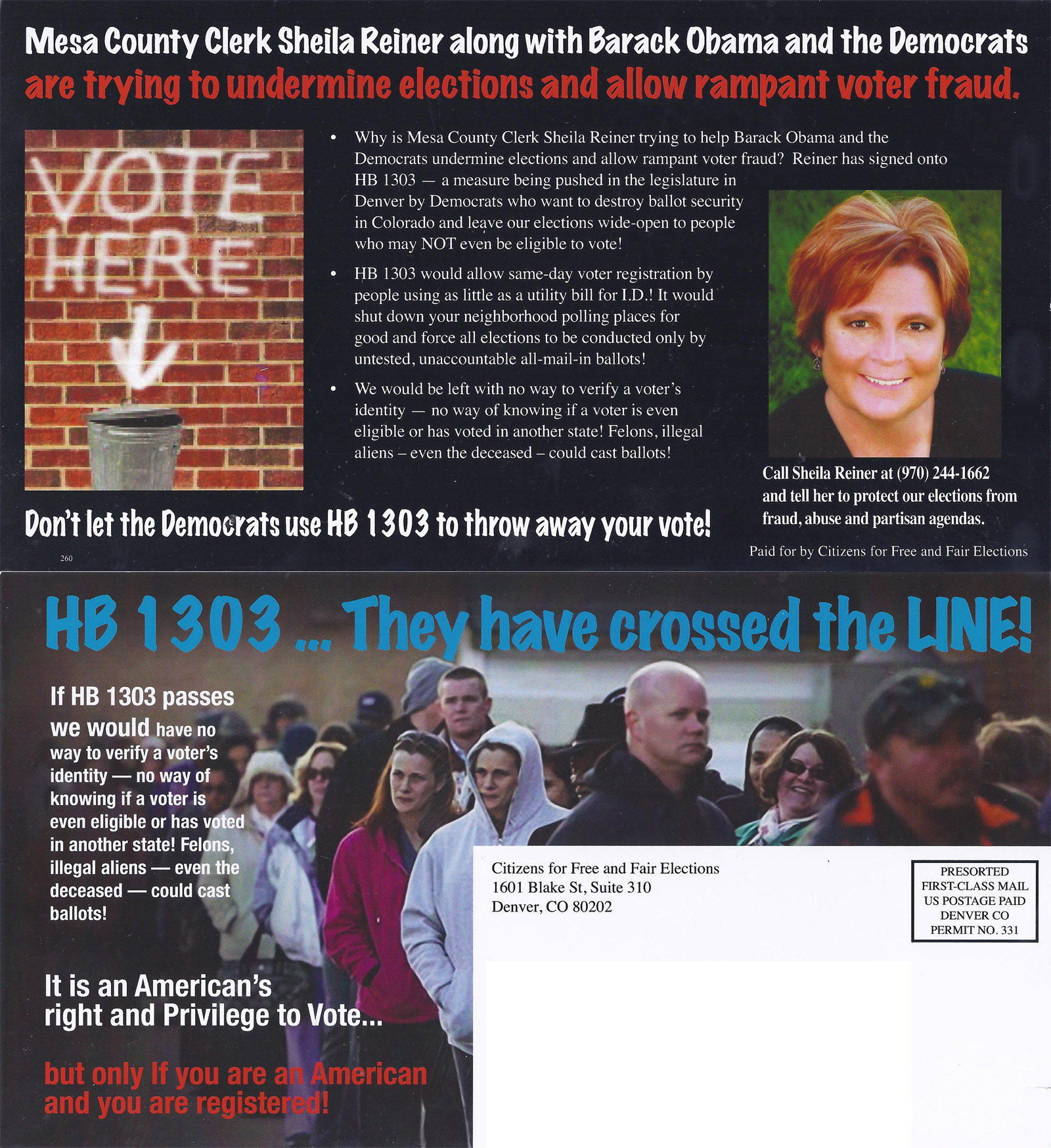 This mailing is hitting Mesa County Clerk Sheila Reiner on her support for House Bill 1303, the Colorado Voter Access and Modernized Elections Act updating a number of election laws and procedures. Very hard-hitting from a conservative point of view, this mailer warns that if House Bill 1303 passes, "felons, illegal immigrants, even the deceased could cast ballots!" Reiner is working with Barack Obama, says this mailer, to "undermine elections and allow rampant voter fraud." "Don't let the Democrats use HB 1303 to throw away your vote!"

By now, some of you have realized, based on your own knowledge, that

1. House Bill 1303 doesn't do any of that, and
2. Mesa County Clerk Sheila Reiner is a Republican.

But during the acrimonious debate over House Bill 1303 this past week, the fact that it is supported by elections officials in both parties from all across the state has emerged as a glaring inconsistency as legislative Republicans have insisted the bill has "no bipartisan support." This mailer neatly sidesteps that problem by treating Republican county clerks as if they're Democrats! Which keeps the messaging, you know, uncomplicated.

One other point you'll find noteworthy is the return address for the group responsible for this mailing, the so-called "Citizens for Free and Fair Elections."

Yes, we know they're not called Hackstaff Gessler anymore. But you get the point.

It's not the first red-on-red treachery we've documented, but this kind of open political warfare on behalf of a sitting Secretary of State against county clerks in his own party is, at least in our experience, very much unprecedented.