In Which, Yes, Michelle Morin IS a Bigot, and Republicans Say So, Too

2010 Colorado Grassroots Leadership Award winner and one of "Campaigns and Elections" magazine's top five Republican influencers in Colorado, Michelle Morin, didn't mince words in a public Facebook post Thursday, alleging that gay unions would lead to the normalization of child rape. In her own words:

Morin was commenting on her own status post, in which she declared liberty unimportant when compared to critical things like the founding fathers' (read: Morin's) definition of "virtue": 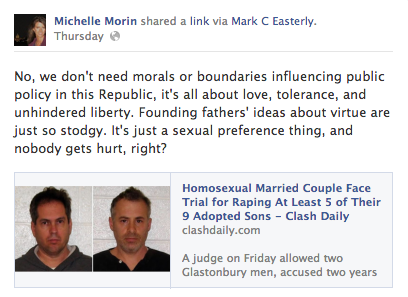 But this isn't a blog post about Michelle Morin saying something stupid. You can read her own blog for that. No, this is a blog post about Republicans and Tea Party affiliated Libertarians finally having had enough of the kind of outright hateful bigotry Morin displays here.

One more screencap from Morin, incredulous that she's been called out by a conservative: 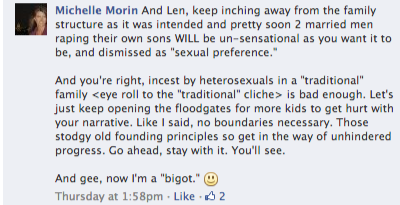 Doubling down on her disgusting insinuations about gay parents, Morin attaches a cute li'l smiley face to her, "Now I'm a 'bigot.'"

Yes, Michelle, you are–and the beautiful thing is, I don't have to tell you so. Your own party has that covered. Some quotes:

So by that argument, the married couple that I posted about, will also become "sexual preference"? It can't be one way for some humans and the other for others. Evil is evil no matter if straight married or gay married. Both sets of couples did awful things and should be punished! How about if we all get on the SAME bandwagon for the safety of ALL kids of ALL marriages?

This poster's Facebook profile picture says, "This Person Will Retire Gun-Grabbers in 2014," and she lists the Campaign for Liberty website in her bio. Hmm… must be a liberal in disguise, right?

Michelle, you are a bigot if you feel that one article about 2 evil men is proof that homosexual families are going to rape their kids at a higher rate than traditional families. Until you can have proof of that this is at a minimum slander if not worse. How about I find an article about how a black/hispanic/asian/muslim couple raped their kids, would you then agree the black/hispanic/asian/muslim race is evil?

Again, from an outspoken conservative.

Linking the gay component to the rape is like blaming the guns for the killing. Heterosexuals rape too. The fact they got 9 kids is another story thar should be highlighted, but to say the gay in them did this is just shameful and it is the reason Obama gets RE-elected with the economy the way it is.

This fellow is a fan of Tancredo and Coffman, among others.

Because no man has ever raped his daughter, daughters, step-daughters, adopted daughters, wife, etc….This has nothing to do with gay. This has to do with Wrong. Period.

This poster is a fan of Rand Paul for President 2016.

Republican leadership in Colorado has repeatedly failed to do the one thing they could and should do to develop a viable GOP capable of anything more than permanent minority status: Edit the party. Edit out the bigots, the people who boo the Log Cabin Republicans, the racists, the xenophobes, the sexists, and all the charmers like Morin who think it's completely acceptable to insinuate by implication that Colorado's Speaker of the House is in danger of molesting any male child he and his partner may adopt.

It looks like, once again, the party heads will have to run to catch up with the parade they're "leading." Ordinary Republicans–even those conservative enough to think background checks are "gun grabbing"–are sick and tired of hearing from bigots who think their gay friends and relatives are child rapists. They're sick of losing votes to these disturbed party mouthpieces, and they're not going to take it anymore.

Memo to Tea Party celebrities: Even your own fans don't want to hear this crap anymore. Don't take it from me. Take it from "This Person Will Retire Gun-Grabbers in 2014."