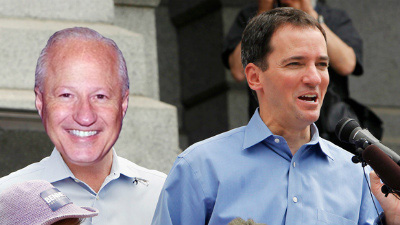 The scene from today’s surprise announcement.

AURORA: In a stunning turn of events, incumbent GOP Rep. Mike Coffman announced this morning that he is endorsing his Democratic opponent, former Colorado Speaker of the House Andrew Romanoff, for election to Coffman’s CD-6 seat in 2014.

“Since narrowly surviving my re-election bid in 2012, I’ve come to realize that former House Speaker Andrew Romanoff already holds most of the positions on the major issues best suited to a representative of the Sixth Congressional District,” said Coffman. “As part of my shameless attempt to re-invent myself in accordance with my newly competitive and diverse constituency, I am endorsing Romanoff’s campaign to represent my district in Congress.”

Coffman clarified that is he not exiting the race for CD-6, and intends to win re-election to his congressional seat in 2014.

“Look, I’ve got to be careful here,” said a frank Rep. Coffman. “Last year, I almost lost this seat to a totally unknown pipsqueak. It was so much easier when I only had to answer to Tom Tancredo and the Castle Rock Trap and Skeet Club! I need time to make this reinvention thing stick, and the best way to buy that time is to sound like I agree with Democrats on everything. Of course I’m not really agreeing, so I have to be careful not to actually say anything concrete myself.”

“With that in mind, endorsing Romanoff until I can figure out how to thread this needle is the safest thing to do,” said Coffman. “Whenever you get a statement from Romanoff’s campaign, please add ‘Rep. Coffman agrees action needs to be taken.’ If said statement is calling for action not to be taken, please change my response accordingly.”

“Working together, we’re finally going to give this district the leadership it needs,” said Coffman.

For an important update to this press release, highlight the invisible line of text below.