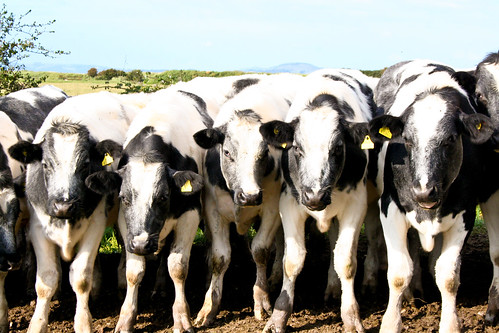 The latest weapon in the war between cost reduction and animal welfare: So-called ag-gag laws, which criminalize whistleblower investigations of animal cruelty. These "see no evil" measures protect agricultural enterprises at the expense of workers and consumers. Although these investigations enjoy the support of 71% of Americans, they mean huge costs for big ag. That's why laws that turn whistleblowers into felons have been introduced in eight states already, and why this destructive legislative agenda is likely to arrive in Colorado by 2015.

In a landmark 2008 case, a judgement totaling nearly half a billion dollars was entered against a meat supplier caught on film torturing "downer" cattle to get them to rise and walk to their deaths. Among other horrific abuses, workers were videotaped ramming collapsed cattle with a forklift. Downer cattle can't be sold for human consumption because they may risk transmitting Bovine Spongiform Encephalitis, aka "Mad Cow Disease."

Needless to say, industrial agriculture isn't eager to accept up to $500,000,000 in possible liability, on top of ever-increasing operating costs. The American public consistently demands more, cheaper animal products, to the tune of 200 million additional pounds of meat year-over-year. Instead of establishing procedures to avoid animal abuse and the associated food safety risks, agribusiness has elected to push legislation that protects abusive businesses and hurts workers. Let's take a look:

Already on the See No Evil Ban-Wagon: North Dakota, Kansas, and Montana have been safe havens for agribusiness since the 1990s, when all three made it a misdemeanor offense to enter a facility closed to the public and take photographs or audio/video recordings.

Jumping on the Ban-Wagon: Utah, Iowa, and Missouri, which passed ag-gag laws last year. (Missouri's law is a much weaker compromise bill, whereas Utah and Iowa enacted full-blown ag-gag legislation making it a crime for workers to record animal abuse.) ABC News notes that Iowa's ag-gag law was passed shortly after ABC aired an undercover video depicting abuse of chickens at an Iowa egg factory.

Colorado is home to more than 2.6 million head of cattle. With gross farm income close to $5 billion, farming remains Colorado's single largest industry. Colorado's independent streak and record of killing animal abuse friendly legislation likely kept us off the list of test states this year and last year, but if "see no evil" ag-gag bills succeed elsewhere in 2013, they'll get here by 2015 at the latest. In the unlikely event that Republicans retake the Colorado House or Senate in 2014, farmer-legislators like Representative Sonnenberg can be relied upon to introduce ag-gag bills in Colorado and push for their passage.

Who will actually be writing these putative bills? I'd bet an Elway's steak dinner on the "Center for Consumer Freedom" as a major player. The brainchild of wealthy lobbyist Richard Berman, the CCF dedicates itself to "exposing" organic food advocates, the HSUS, and various other entities whose actions are deemed undesirable by Berman and the food-and-beverage industry. Activists turn Berman's own tactics against him on BermanExposed.org, which ties together Berman's 20+ astroturfing projects, with goals like destroying unions; attacking the Center for Science in the Public Interest; and convincing consumers that high-fructose corn syrup isn't linked to obesity.

If and when ag-gag lobbyists bring their see no evil agenda to Colorado, count on power players like Berman to spend heavily on convincing legislators that budget-conscious omnivores want to be protected from "eco-terrorism" and the like. In reality, according to ASPCA research, 94% of Americans agreed that farm animals raised for food deserve to be free of cruelty and abuse. Even right-wing Congressional candidate Tisha Casida shares Coloradans' concerns about food safety and sustainability. Her undeniably conservative food safety agenda focuses on protecting small farmers and ranchers who provide innovative products, rather than on handouts to the agriculture megabusinesses who push those small farmers out of the market.

Sensible conservatives and progressives agree that industrialized agriculture doesn't need special protection from whistleblowers, especially when that protection would hide food safety hazards. Turning whistleblowers into felons serves exactly one demographic, and that's not "Colorado consumers." Every handout to factory farms takes money out of the pockets of sustainable local farmers who can't compete on price with agribusinesses willing to practice organized cruelty against both their human workers and their living "products."

Got a lead on ag-gag laws in Colorado? Email me.