At least he's not your future county Republican party chair… unless he is.

Earlier today, Jason broke the story that Dave Williams, aspiring El Paso County Republican Party Chairman, doesn't regret booing the Log Cabin Republicans at a Republican party assembly in May. Tonight, Williams was again asked to apologize for booing the GBLT Republican group, and instead of an apology, responded with this somewhat pathological Facebook post: 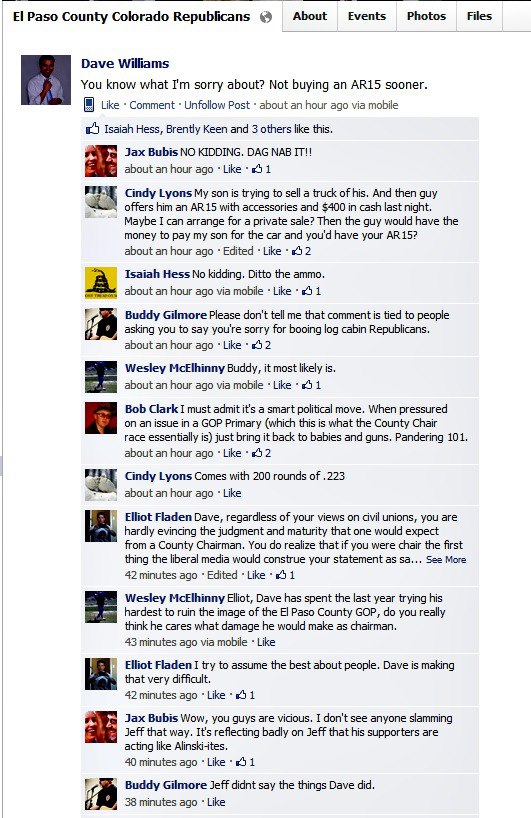 Yes, that is a direct response to a request that Dave apologize to the Log Cabin Republicans.

Yes, it is kind of goddamn fucked up to respond to such a request with a reference to purchasing an assault rifle. Especially when the folks to whom Dave ought to be apologizing are members of a group far more likely than any other minority in the United States to be the victim of a violent hate crime.

If you're an El Paso County Republican, you should be very worried about your party's future governance. Not only is Dave Williams the kind of person who thinks it's appropriate to mention buying an assault rifle when asked to apologize for booing his party's only real GBLT group, there's a whole lot more to this story. More in this space tomorrow… for now, go ahead and whet your appetite by reading through this apparently baseless 2012 complaint by Dave Williams against the Chair he's running to replace.

I don't like most of today's Republicans, and that's no secret. But trust me here: Dave Williams is a different breed entirely. He is to the average Republican county-level partisan as Scott Gessler is to the average Republican statewide candidate. I'd like to see Republicans crash, burn, and extinct their own party throughout Colorado, and, in line with that desire, I really ought to be rooting for Williams for Chair. But no matter how much damage he'd do to the party, I just can't bring myself to support Dave. He's not the kind of fellow who deserves any leadership post, anywhere, any time. Stay tuned as this story develops for more background on why…

(Most of you don't need this disclaimer, but for the Republican observers who may stumble across my post and wonder, I have absolutely no affiliation to Jeff Hays or any other El Paso County GOP Chair Candidate. To my knowledge, I've never spoken to any of them, and I can only tell you who "Jeff Hays" is because I read it in Jason's post earlier. My interest here is in exposing a scumbag, not in supporting any of his opponents, who, for all I know, may also be scumbags.)