It looks like we’ve got our first Primary matchup of the 2014 election cycle. 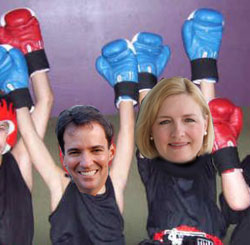 We’ve had both Andrew Romanoff and Karen Middleton on the CD-6 Line for more than a week now, but we’ve gone from “potential primary” to “probable primary” based on what we’ve been hearing in the last day or two.

It’s far too early to tell if a full-on June 2014 primary is unavoidable, but for now both Middleton and Romanoff are making it known that they are in it to win it. Romanoff has a clear edge in name ID, but fundraising may be another story. Middleton resigned her State House seat in 2010 to head up Emerge America, a relatively new organization with a focus on recruiting and training women to run for elected office. It’s likely that Middleton’s work around the country for Emerge America put her in touch with plenty of big-money donors, and such a network could help Middleton to an early edge in fundraising.

How that early fundraising plays out for Middleton and Romanoff will go a long way toward determining whether this matchup makes it all the way to a June primary. In situations like this, one candidate often bows out long before the ballots are printed. But as we saw with Romanoff in 2010, it’s unlikely that he’ll blink first.