There are numerous examples of how Twitter has changed political campaigns and the reporters who cover them, but few are as telling as this tweet from Kurtis Lee of the big Denver newspaper: 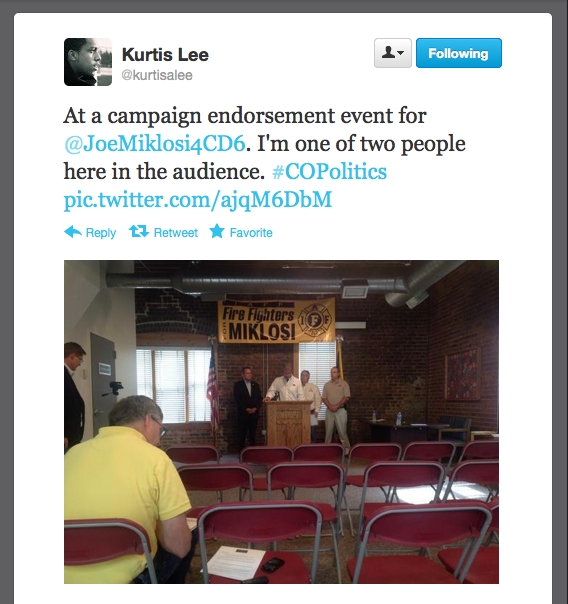 Before the Twitter era, there wouldn’t have been much of a reason for a reporter to take a picture like this (if a reporter even had a camera). Maybe a reporter would have mentioned that the room was empty in a subsequent story, but that wouldn’t be as telling as this single image.

The fact that there was nobody in the audience doesn’t make Joe Miklosi’s announcement less important (full press release after the jump), but it is a small black mark on a positive story. Reminder to Press/Communications people: if you aren’t sure that you will get good media coverage at a press conference, then you damn well better make sure there are volunteers on hand to take up seats.

Today, Joe Miklosi announced endorsements for his campaign from the Colorado Professional Fire Fighters and the Colorado Fraternal Order of Police. As a state legislator, Joe has worked to help the men and women who keep our cities and neighborhoods safe, and he is committed to doing the same in Congress.

“I am so honored to have the support of Colorado’s first responders, and I pledge to give them all the help they need to protect and serve the people of our state,” said Sixth Congressional District Candidate Joe Miklosi. “This past summer we saw the bravery and commitment that these men and women exhibit when they are faced with a community tragedy or a natural disaster. They deserve representatives ready to fight on their behalf in Congress.”

“During his years at the State Capitol, Representative Miklosi has been a tireless supporter of the fire fighters and public safety issues,” said Aurora Fire Fighter Steve Clapham. “He has never wavered in his defense of working men and women.  The Colorado Professional Fire Fighters are proud to endorse Joe Miklosi for the position of Congressman from the Sixth Congressional District.”

And the Colorado State Lodge of the Fraternal Order of Police issued a letter endorsing him as well.

“Joe Miklosi has a clear record of support for the men and women who put their lives on the line every day and we are proud to support him. He is un-questionably a staunch supporter of law enforcement,” said Frank Gale President of the Colorado State Lodge of the Fraternal Order of Police. “Joe is concerned about keeping our communities safe. He not only understands the issues surrounding public safety, but he is willing to roll up his sleeves and work to solve the public safety problems facing our country now and in the future.”

These endorsements are representative of the contrast between Joe Miklosi’s support for first responders and Mike Coffman’s record of not looking out for their interests. Joe is committed to helping first responders get the health care coverage they need for work-related health problems.