Ba’al’s Back And Boebert Says She Beat Him 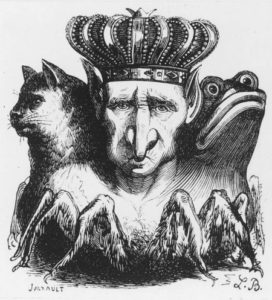 Back in April of last year, as readers may recall, then-CD-7 Republican candidate Tim Reichert took a hard theological line against abortion rights, declaring that every abortion that is performed anywhere for any reason is “the sacrifice of a child at the altar of Ba’al.” For those of you who didn’t learn about Ba’al in Sunday school, Ba’al is an ancient Canaanite deity who competed with the Israelite god whom we know today as…well, God (proper noun). After debuting in the Old Testament, Ba’al had a comeback career as a medieval demon in the 16th Century Pseudomonarchia Daemonum in which he is depicted as having the heads of a frog and a cat in addition to a mean-looking old man.

Congratulations, you now know more about medieval demonology than you will ever need to.

Fast forward to this past weekend, and we have Colorado’s everlasting fount of loosely theistic word salad Rep. Lauren Boebert retelling the story of the Prophet Elijah versus the “Prophets of Ba’al” in the Old Testament book of 1 Kings, Chapter 18:

Lauren Boebert said God told her that her re-election victory would be like the Prophet Elijah in the Bible defeating the prophets of Baal. pic.twitter.com/YBXdslLCve

So, the biggest problem with this analogy is that the Elijah vs. Prophets of Ba’al competition was not close. The Ba’al prophets prayed to make fire descend from heaven and burn their sacrifice for days, but Elijah made it look easy and his sacrifice burned right up despite being soaked in water. Boebert’s 550-vote squeaker was anything but easy, so in order to make the story work she just makes up the end:

Setting that aside, if you don’t know and don’t bother to learn what Boebert is talking about, it’s as bizarre as Reichert’s suggestion that Ba’al would prefer aborted babies on the pyre. Of course there is an audience for this kind of babble, but it’s not a majority of voters.