Marjorie Taylor Greene refused to credit the Republican Speaker holdouts (Biggs, Gaetz, Boebert, etc.) for “the deal,” claiming the concessions “were pretty much already there” and “were made weeks and months before” the public floor fight. pic.twitter.com/mSWOrlInud 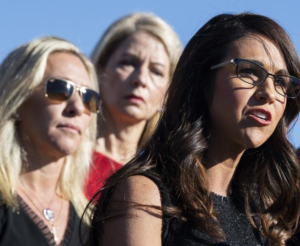 Over the past few months and culminating in the protracted drama over now-Speaker of the House Kevin McCarthy’s historically fraught confirmation vote, the rivalry between what are generally agreed to be the two most unapologetically immoderate Republican women in Congress, sophomore Reps. Marjorie Taylor Greene of Georgia and Lauren Boebert of Colorado, has exploded into public exchanges of insults.

But as Politico reported back in April of last year, the tension between these two cantankerous lawmakers has been simmering for quite a while:

Marjorie Taylor Greene and Lauren Boebert look from the outside like MAGA twins, both loathed by Democrats for their incendiary right-wing rhetoric. But inside the House GOP, they’re not quite buddy-buddy.

Privately, Republicans say Boebert (R-Colo.) — who’s seen as more of a party team player than Greene — detests being tied to her Georgia colleague. [Pols emphasis] And when the House Freedom Caucus board of directors gathered last month at its usual spot a few blocks from the Capitol, the two tangled over Greene’s appearance at a February event organized by a known white nationalist.

Their confrontation grew so heated that at least one onlooker feared the Greene-Boebert back-and-forth might escalate beyond the verbal cage match had another board member not stepped in to de-escalate, according to a GOP lawmaker who was granted anonymity to describe what happened…

Following the battle over McCarthy’s speakership, in which Boebert was one of the last two holdouts in an impasse that just about turned violent on the House floor, the notion that Boebert is “more of a party team player than Greene” has been turned completely on its head. Following her own readily-acknowledged quid pro quo of being allowed back on House committees, Greene emerged as one of Kevin McCarthy’s stoutest defenders–which also happened to be the Donald Trump loyalist position, with MTG photographed trying to pass her phone with Trump on the line to recalcitrant lawmakers.

The end result is that MTG has greatly improved her standing with Republican leadership, but to paraphrase Machiavelli, Boebert struck at the proverbial king and did not kill him. The narrow majority and the concessions made by McCarthy could make it more difficult to punish the holdouts, but the idea that Matt Gaetz and Boebert helped their standing with their Republican colleagues is laughable. Gaetz has always been something of a pariah, and now Boebert and Gaetz and inextricably linked. It’s a disaster for Boebert whether she realizes it or not, but more importantly it’s a disaster for Boebert’s constituents–who will pay the price for Boebert alienating her own leadership.

Politically, MTG is in a much better position to buck fellow Republicans than Boebert from Greene’s ultra-safe Republican district. Boebert, who barely survived in a district that she should have won by ten points, has no more margin for preventable error.

The problem, at the end of the day, is that Lauren Boebert does not know how to change course.

And MTG does. It could make all the difference in the rivalry between them.