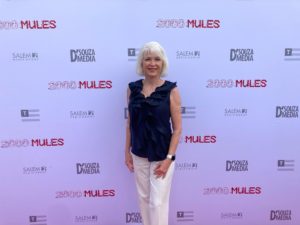 Tina Peters on the red carpet at Mar-a-Lago earlier this year.

As the Grand Junction Sentinel’s Charles Ashby reports, another tough day for indicted Mesa County Clerk Tina Peters as a second deputy cops a plea agreement to testify against Peters in exchange for sentencing leniency:

Sandra Brown, who was fired by county officials in December 2021 over her involvement in alleged tampering with election equipment, faced two felony charges of attempting to influence a public servant and conspiracy to commit criminal impersonation…

The plea deal called for reducing the second charge to a misdemeanor count of official misconduct, and asking Mesa County District Judge Matthew Barrett for a minimal sentence, one that still could include jail time.

In her allocution, Brown said she was acting under orders from Peters, knew something was amiss but didn’t speak up.

“My job was to protect the integrity of the elections, and there were steps that I could have taken that would have done that in a better job,” she told Barrett. “There were things going on that I should have questioned and didn’t.”

Along with Peters’ deputy clerk Belinda Knisley, Sandra Brown has in-depth knowledge of what they’re both now laying at Clerk Peters’ feet–a criminal conspiracy to make and distribute unauthorized copies of sensitive election system software, by stealing the identity of a local resident to allow an election conspiracy theorist access to the equipment. These crimes were committed with the goal of uncovering evidence that the 2020 presidential election was stolen from Donald Trump, which of course did not exist.

With Peters’ two top deputies now lining up to testify against her in a case that could sentence Peters to prison for the rest of her natural life, the time has come for Peters to end the charade, cooperate with investigators, and even shed some light on who put her up to this career-ending mistake in the first place. Peters did all of this in the service of Trump, perhaps sincere in the belief that once Trump was “rightfully” restored to the presidency she would be pardoned. The crimes Peters stands accused of are disqualifying from public office, but in the end Peters is also a bit player in a much larger folly.

What Peters needs to do now is follow the example of January 6th insurrectionists who have repudiated Trump and acknowledged they were misled about the 2020 elections. This is not shaping up to be a close case at trial, and the possible 35-year jail sentence the 67-year-old Peters faces should motivate Peters to seek a deal of her own. The seriousness of Peters’ alleged misconduct may indeed warrant that stiff sentence. But we have to believe sparing taxpayers the expense of a trial, not to mention some remorse, would help Peters avoid the worst possible consequences.

If there’s anyone out there that Peters still listens to, the message is simple: Trump isn’t worth this.