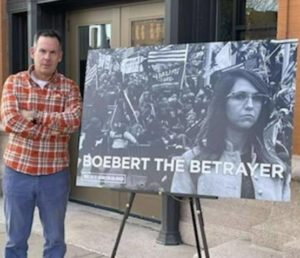 Yesterday’s final counting of cured and overseas ballots slashed freshman GOP Rep. Lauren Boebert’s already narrow lead over Democratic challenger Adam Frisch into the range necessary to trigger an automatic recount of the results–551 votes at the last count. Although this further delayed the final results in this race, it’s very unlikely that the recount will shift enough votes to change that result.

Recognizing this, Frisch, who nobody outside his team thought had a chance but ran a pitch-perfect centrist campaign well attuned to the district against Boebert’s high-visibility low-productivity record in office, conceded the race this morning to Boebert rather than further expend resources in a futile recount effort. Colorado Public Radio:

The closeness of the race took many in the political world by surprise, given Boebert’s national profile and the fact that Republicans hold a 9 point advantage in the district. It’s Colorado’s most expansive congressional seat, spanning western and southern Colorado and including cities such as Pueblo and Grand Junction.

Boebert’s narrow margin means the state is required to order an automatic recount.

However, no Colorado recount in recent memory has resulted in more than a few dozen votes being reassigned, and those are usual cases of poorly marked ballots where human judges have to try to interpret the voter’s intent (or, recently, because a county found ballots it failed to count the first time)…

“Colorado elections are safe, accurate, and secure,” said Frisch, adding it would be unethical for his campaign to continue accepting money from supporters. “Please save your money for your groceries, your rent, your children, and for other important causes in organizations.”

Although Boebert will get her cacophonous second term in the GOP’s teensy new U.S. House majority, the damage inflicted to her public image from this near defeat has transformed CD-3 from the sleepy GOP-leaning backwater into one of the top pickup targets for Democrats looking to reclaim the majority in two years. Frisch himself has already filed for a rematch, and after coming so close he’ll be a strong if not prohibitive contender for the nomination in 2024. Either way, Frisch has demonstrated Boebert can be defeated in this R+9 district, which was in fundamental doubt after Boebert’s easy defeat of her GOP primary challenger Don Coram.

No one believed it until Adam Frisch proved it. And for that, he’s a hero for Democrats even in defeat.