Rep. Doug Lamborn (R-Colorado Springs) is mad as hell, and he’s not going to take it anymore!

There are a few things in life that you can always count on — and Congressman Doug Lamborn of Colorado Springs sponsoring pointless legislation is right at the top of that list.

While Lamborn may not really even use the Internet, he is very attuned to the manufactured concerns of right-wingers everywhere. Lamborn’s congressional office sent out this press release today:

“I am appalled at the far-left’s crusade to indoctrinate young, innocent children with their ‘woke’ agenda,” said Congressman Lamborn. “This legislation will stop taxpayer dollars from funding programs exposing children under 10 to radical, confusing, sexually-oriented material. I thank Vice Chairman Johnson for his leadership on this critical issue and will continue fighting against dangerous ideologies that harm our youth.”

The “Stop Sexualization of Children Act of 2022” seeks to put an immediate stop to a thing that doesn’t appear to be much of a problem. The bill “prohibits the use of federal funds to develop, implement, facilitate, or fund any sexually-oriented program, event, or literature for children under the age of 10.” And our personal favorite: “The bill prohibits federal funds from being used to host or promote events where adults dance salaciously or strip for children.”

It’s nice that Lamborn has taken a break from trying to prosecute Big Bird, but this legislation is definitely the result of people in Congress who don’t have enough real work in their inbox. According to Lamborn’s press release, there are two whole examples of this problem:

Planned Parenthood, for example, is encouraging legislatures and school boards around the country to implement sexual education curricula that teaches radical gender theory to children under 10. Children should be learning about reading, writing, and mathematics, not radical gender theory.

That’s pretty weak. Here’s the other one, which is at least a tad more specific:

Federal grants from the Department of Health and Human Services were recently used to fund an event in Alaska where a drag queen performed for children. The Department of Defense is funding drag shows for families on military bases, and incorporating radical gender ideology into curricula at DOD schools. HHS and DOD funding should be used to keep our country healthy and safe, not to stage burlesque shows for children. 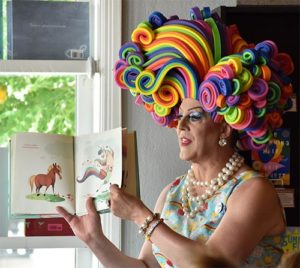 This is how communism starts, or something.

“The Department of Defense is funding drag shows for families on military bases.” The only mention of this that we could find outside of Fox News or OANN comes from this story in May via The Los Angeles Blade:

A drag queen story scheduled to be held at the library in honor of Pride month at Ramstein Air Base was abruptly cancelled by the command staff of the 86th Airlift Wing on Thursday.

According to Stars & Stripes, the 86th Air Wing’s public affairs sent a statement to a radical-right anti-LGBTQ+ news outlet in Canada, The Post Millennial, which had requested comment to its article about the event and also accused the Air Force of pushing a more “woke” agenda among servicemen…

…The Post Millennial’s story framed its reporting using hard-line right terms and descriptions of the LGBTQ+ community; “Drag Queen Story Hour has become a phenomenon in recent years, with men dressing up in clownish, garish costumes of women to read to children- Many drag queens have sexualized names, like Penny Tration.”

This all seems very silly, but perhaps this is why Lamborn is the political version of an unkillable zombie who is able to defeat all challengers in his right-wing district despite rarely running much of a campaign.

Just wait until he finds out about the “furries” invading Colorado schools.