Next Up in the 2012 Class of Horrible Republican Lit

When Republican candidates aren’t failing kindergarten math in their lit, they’re failing first grade English by using implied three-letter cuss words to sling mud at, ironically, one of the most eloquent Democrats in the legislature. Observe: 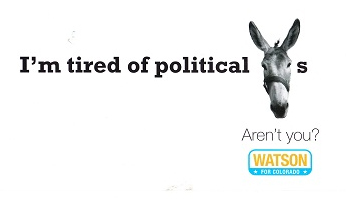 That’s a mailer from Brian Watson, the Republican opposing Democratic incumbent Representative Daniel Kagan, running in the brand-new HD3. Watson, a political novice whose website is long on buzzwords like “accountability” and “transparency” but hasn’t published a single concrete policy proposal (how transparent of him!), seems to have nothing to say about Kagan that can be said to your grandmother or in church. That’s probably because there’s really nothing to attack Daniel on, even if you’re a desperate Republican newcomer.

Pretty much the same point, in Kagan’s own words, after the fold:

An email from Kagan responded to the slimy mailer:

I am saddened that my opponent has chosen to begin his campaign with name-calling. We have come to expect divisive, ugly politics from Washington DC, but that’s not the way we do things in Colorado.

I was proud last year to receive support from members of both parties to pass the “Skills for Jobs Act”, legislation which will help Coloradans have access to the skills that will lead to high paying jobs. I believe in Colorado. We have a great future ahead of us if we put politics aside, work together, and solve the very real problems Colorado families are facing.

Name-calling and game playing by ambitious politicians is the wrong recipe for our future. As your state representative, I believe that we can work together to address the challenges facing our families. I have been proud to serve my district for four years, and with your support, I promise to continue solving roblems, improving education, and fostering innovation to strengthen our economy. Together, we can make Colorado the best place to live, work and raise our families.

During my four years in the Colorado House, I have been proud to be part of a legislature that holds itself to a higher standard. I am more interested in solving problems than playing politics. That’s why I entered the Colorado House – because the families of our community deserve real leadership, not petty name calling.

Wash that mouth out with soap, Brian Watson, and call Dan Kagan back when you’ve got something interesting to debate. Meanwhile, Colorado voters can regale themselves with fascinating, informative statements like this one, from Watson’s website:

Brian Watson will work to remove government red tape and give employers some breathing room to create new, well-paying jobs.

Compare to Kagan’s policy statement on the same issue:

Instead of catering to big corporations, Daniel is looking out for you. He closed corporate loopholes that benefit wealthy special interests, and passed legislation holding government accountable. He also championed legislation that is projected to create 23,000 clean energy jobs. [HB10-1001; HB10-1119; HB10-1189]

Brian Watson: Platitudes and mudslinging from the peanut gallery.

Daniel Kagan: Actual legislative accomplishments, and numbers to go with them.

Shouldn’t be a tough choice for voters, even with reapportionment adding a hefty chunk of Republicans to Kagan’s territory.