Crime Rates are Much Higher in John Kellner’s District 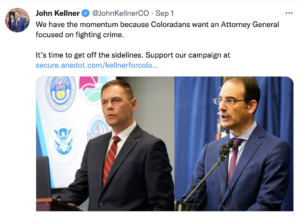 Republican Attorney General candidate John Kellner and his friends at the Republican Attorneys General Association (RAGA) have spent months making a big deal about the rise in auto thefts in Colorado. This is the heart of Kellner’s pitch to voters in arguing that he would keep Colorado “safer” than incumbent Democratic Attorney General Phil Weiser.

If you listen to Kellner talk about rising crime rates in Colorado, you’ll notice that he ONLY ever mentions auto theft. It’s the only issue that pops up in mail pieces from RAGA, and it’s pretty much the only crime-related issue that Kellner discusses on the campaign trail. We’d argue that it is silly to blame the Attorney General (whoever it is) for crime rates in general, since that’s not really the AG’s job, but since Kellner keeps bringing it up, the topic is fair game.

Take a listen to Kellner and his former boss George Brauchler from KNUS radio this morning talking about motor vehicle theft as though it is the only sort of crime metric that is relevant when discussing law enforcement in Colorado.

KELLNER: I think we’re taking the right approach [on auto theft], and I think that’s probably reflected in some of that CMAT data that shows that the lowest rates of car theft in the metro area are in Arapahoe and Douglas counties.

BRAUCHLER: Wow. That is so contrary to the message that your opponent has put out that crime is somehow more rampant in the 18th [judicial district] than it is in, I don’t know, Denver. You don’t even need to look at data to know that that’s flat false. [Pols emphasis]

Would it surprise you to learn that Brauchler is full of crap here? Of course not.

We did look at data from the Colorado Crime Stats website, and the numbers explain quite clearly why Kellner (and Brauchler) are always cherry-picking auto theft statistics about Judicial District 18, where Kellner is the District Attorney. As it turns out, you are MUCH less safe in JD-18 than you are in the rest of Colorado since Kellner took over as District Attorney in 2021. 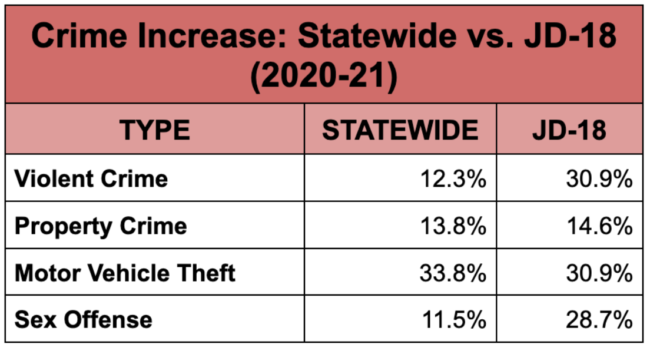 Motor vehicle theft has increased more in Denver than anywhere else, which is to be expected given that Denver is Colorado’s largest city. But violent crime rates in Denver have increased by 8.7% between 2020-21…compared to 30.9% in JD-18.

For a different comparison, let’s examine crime rates in JD-1 (Jefferson, Gilpin) compared to JD-18. Both districts are in the Denver Metro area, and both have new District Attorneys who started their jobs in 2021.

Again, you can see that you are less likely to have your car stolen if you live in JD-18. Unfortunately, you are significantly more likely to be robbed, raped, or murdered if you live in Kellner’s district.

Kellner obviously knows that these numbers look really, really bad for him, which is why he never talks about any sort of crime other than motor vehicle theft. But when he does talk about crime, Kellner makes sure to make it sound like he would be better than Weiser on the issue. Here’s what Kellner said on Colorado Public Radio in August:

I think Coloradans are ready for somebody who is going to wake up every single day and think about how they are going to make the state safer.

Kellner isn’t making JD-18 any safer, so why would we expect him to do a better job statewide?

On Kellner’s campaign website, it says, “Colorado needs an Attorney General who will prioritize public safety over politics.”

We couldn’t agree more. By John Kellner’s own metrics, he should be disqualified as a candidate for Attorney General.