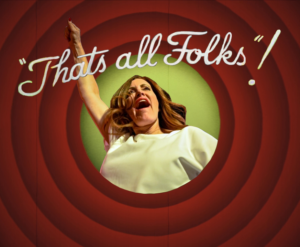 True in more ways than one.

Republican gubernatorial candidate Heidi Ganahl took time out from her busy schedule of making baseless allegations about “furries” in schools to film her first television ad of the cycle.

You can watch the ad below after the jump…which might be about the only place you’ll see it. Ganahl’s television ad buy is less than $300k for both Denver and Colorado Springs and runs through Nov. 6.

If you’re unfamiliar with the cost of television advertising, $300k would be a decent ad buy in a congressional race — if that was for one week of air time. Ganahl’s ad buy is in the same ballpark as what Republican self-funder Tim Walsh is spending to run cable television ads in a STATE SENATE race in SD-20 (Lakewood-ish).

Ganahl’s campaign may still increase the amount of money it spends on television, but unless she finds some sort of buried treasure in the next week or two, it won’t be much of a bump. Ganahl’s campaign reported about $937k in the bank at the end of September, most of which was due to loans from Ganahl herself. After paying for things like staff salaries, office space, and lighting cash on fire to warm her hands, there won’t be a lot of money left over unless Ganahl decides to write more personal checks to her campaign.

At least Ganahl won’t suffer the indignity of being a major party candidate for Governor who didn’t have enough support to even run ads on television. As for all the other self-inflicted indignities…well, Ganahl is just going to have to live with those.