At Least It’s Not Your Ridiculously Bad Walk Piece

“They can think what they want about my mailer,” Ramirez said. “But to talk about my daughter and insinuate that I’m running around on my wife, that bothers me. And it bothers my wife and daughter more than me.”

…FOX31 Denver spoke Monday with one of the publishers of Colorado Pols, who referred to the reaction by Ramirez and Colorado Peak Pols as “manufactured angst.”

“Nobody’s insinuating that [Ramirez]’s running around on his wife,” said Jason Bane, a co-founder of Colorado Pols. “The point is he’s got this random collection of photos with no explanation, so there’s no way to know who’s his wife or daughter. There was no attempt to insinuate he’s cheating. It was just – who are these people?

UPDATE: Via Twitter, @RepRamirez is posting a bunch of pictures of his daughter, ostensibly to clarify her appearance in the walk piece below. Ramirez’s wife, meanwhile (@mrsramirez2002) is really mad about something that must have grown into a super horrible story after different stories were told to her. Because, you see, we didn’t actually say anything about their daughter.

What is truly amusing in all of this manufactured angst is that it just reinforces our original point about the folly of a campaign piece that makes several silly errors arranged within a confusing collage of pictures. Would you assume that the blonde in the top left was his daughter? Would you guess, just by looking at the picture, that the woman in the karate outfit was his wife? Hell, maybe Ronald McDonald is his uncle.

This is just a weird, awful campaign piece for a lot of reasons. We didn’t say anything more than that. 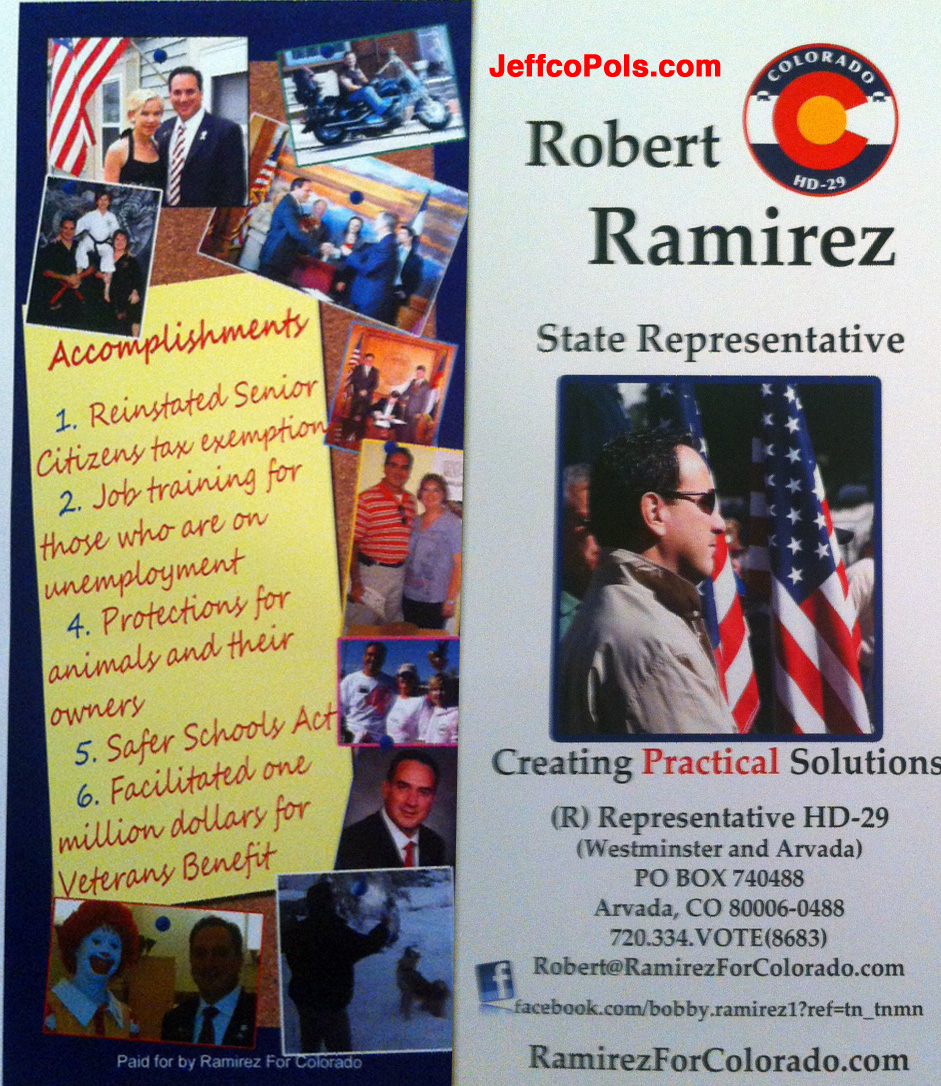 It didn’t seem like things could get worse for State Representative Robert Ramirez. After being forced out of the race for SD-19 by the entrance of much more credible candidate Lang Sias, he’s being significantly outraised and outspent by dynamo opponent Tracy Kraft-Tharp in his re-election bid.

Then again, all of Ramirez’s problems are, perhaps, the result of his own ineptitude. Take, for example, this recent handout/mail piece. Keep in mind that the Republican actually spent money to create and distribute this piece to actual voters.

Let’s start with the obvious. On that sublimely terrible red-text-on-yellow list of accomplishments, Ramirez left out bullet point number three. Seriously, how hard is it to make a list? Sure, it’s easy to overlook a numbering error in the early drafts of campaign piece, but it’s downright stupid for those mistakes to make it into the final, distributed version. Does Ramirez even know how to count?

And what’s with that Facebook link in the lower right corner? Few people are going to go on Facebook to check out a candidate anyway, but nobody is going meticulously type in a complicated URL replete with numbers, question marks, and underscores. Ramirez doesn’t even have a Facebook link on his website — where something like that would kind of make sense — so why on earth would he pay money to put it on his mail piece? You can’t click a link on paper.

So Ramirez took a photo with somebody pretending to be Ronald McDonald down at the Capitol. Neat. Setting aside the fact that Ramirez certainly didn’t get permission to use one of McDonald’s most recognizable corporate trademarks for political purposes, why would he want to? Is he trying to brand himself as the fast food candidate in this race? Beyond that, no candidate should ever publicize photos of them standing next to a clown. Hell, Ronald McDonald looks better in that photo than Ramirez.

Rep. Ramirez played no part in reinstating the Senior Homestead Property Tax Exemption. That happened all by itself.

There’s no question that the two photos of Ramirez with Governor Hickenlooper were used without permission. It’s obvious why Ramirez would want to associate himself with the most popular politician in Colorado, but Hick would no doubt rather be taking bill-signing photos with Kraft-Tharpe.

Then again, maybe Ramirez wants people to think he’s a Democrat. One million dollars for veterans benefits? That’s a lot of state spending from somebody who labels himself a small government conservative.

That attractive blonde woman posing with Ramirez in the upper left-hand corner? That’s not his wife (his wife appears alongside the representative in a much smaller photo adorned in a kung-fu uniform). The woman in the picture may be a family member, but Ramirez should probably point that out in a caption. Looks like he forgot to hire a professional to take a few photos of his family — bizarre, considering even no-hope candidates figure out that they should do that.

The worst photo of all, however, is the large profile shot of Ramirez on the right hand side. While it might make a great photo for a membership card at the local gun club, it shouldn’t be the centerpiece of his first major push to connect with voters. Ramirez doesn’t look like a sitting state representative. Instead, he looks like some cross between a Kentucky Militia leader and the Unabomber. He clearly had a much better photo to use — his official shot from the capital is just centimeters to the left, there — but for whatever reason he decided, “Hey, I don’t want voters to associate my name with my face, use the photo of me in the shades with the flags. I look cool, like a Hispanic Tom Clancy.”

This has to be one of the worst campaign pieces we’ve ever seen. That would be bad enough if Ramirez was the token Republican opposition in a heavily Democratic area. But he’s the incumbent legislator in a swing district. He can’t even number a list correctly, and yet this dude has a vote on issues that affect the entire state.

Although, if this piece is any indication, not for much longer.