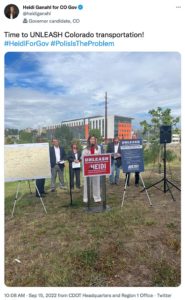 Republican Heidi Ganahl has been an official candidate for Governor for more than a year now, but as we noted on Thursday, time has absolutely not sharpened Ganahl’s political instincts.

Yesterday, Ganahl stood in a field near the Colorado Department of Transportation (CDOT) headquarters building to unveil — nay, UNLEASH — her plan for fixing Colorado’s roads. This was not so much a “plan” as it was a couple of bullet points about roads that Ganahl would like to see fixed.

Much like her “plan” for eliminating the income tax in Colorado and her “plan” to somehow invent new water sources, Ganahl continually demonstrates that she has barely thought about any of these important issues beyond whatever words she can fit into a Tweet condemning incumbent Democratic Gov. Jared Polis.

She said the plan would make personal vehicular travel a higher priority for the state Department of Transportation than it is currently under Democratic Gov. Jared Polis.

“Jared Polis is stealing one of our basic freedoms,” Ganahl said at a press conference near CDOT headquarters in Denver. “Driving gives you the freedom to go where you want, when you want.”…

…In reality, while Polis has supported significant funding boosts for electric vehicles, public transportation (except for RTD), and other climate-friendly transportation efforts, his Department of Transportation is in the middle of its own decade-long plan to spend billions of dollars on roads — including expansion projects. [Pols emphasis]

Ganahl has repeatedly said that she wants to eliminate Colorado’s income tax and cut the gas tax in half, proposals that would eliminate some $10 billion from Colorado’s budget. Ganahl has acknowledged that she literally HAS NO ACTUAL PROPOSAL for how this would even work or what Colorado would do to replace one-third of its budget. Ganahl’s campaign spokesperson says only, “We have a policy team working on it.”

Ganahl says her transportation plan would cost about $10 billion. Between this proposal and her income tax/gas tax reductions, Ganahl has already allocated two-thirds of the entire state budget. Reality has never been Ganahl’s strong suit as a politician. 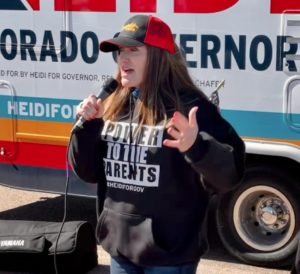 We’re kinda surprised that Ganahl didn’t just promise to drive every Coloradan herself.

So how would Ganahl fund her transportation priorities other than relying on magic fairy dust? The very first bullet point in Ganahl’s transportation plan is this: “Will not raise taxes.” It’s a fun thing to say, but it doesn’t really track with her actual proposal. From CPR:

At the heart of Ganahl’s $10 billion transportation plan is a ballot initiative that would be voted on in 2024. The measure would ask voters to repeal the 2021 transportation bill and its related fees on things like deliveries, ride-sharing services and gasoline and replace that revenue with new taxes that would mirror the fees.

“I’m taking this plan to the voters to get approval, and we will call them taxes as they are,” she said. “That’s the key, it’s just being honest and authentic and transparent with the people of Colorado.”

The transportation taxes in Ganahl’s proposal differ from the fees in the Polis-backed 2021 bill in a few important ways. First, the taxes would be temporary, sunsetting in 10 years. Second, there are significant restrictions on how fee revenue can be spent. Ganahl could more easily shift spending to road projects if the revenue came from taxes. Third, the taxes would be voter-approved. The fees in the 2021 transportation package did not require voter approval because of the way the law was written.

And what happens if Colorado voters turn her down?

“It’ll pass, don’t worry,” Ganahl said of her proposed ballot initiative. She did not say what her contingency plan would be if it failed. [Pols emphasis]

In fairness to Ganahl, you can’t expect her to have a “contingency plan” when she doesn’t have a serious plan in the first place. In order to have a “Plan B,” you kinda need a “Plan A.”

And what about the rest of the money needed to fix all of these roads?

Ganahl’s plan would also rely on $3 billion in public-private partnerships and $3.5 billion in state general fund allocations. She said she was “confident” the legislature could find that money despite her plans to eliminate the state income tax. [Pols emphasis]

“If the people of Colorado are going to approve the funding from the voters, the general assembly must meet the people halfway,” she said. 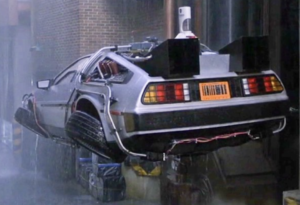 If Ganahl is just going to rely on all of these theoretical things taking place one after another, she might as well promise to just build a bunch of new highway lanes throughout the Denver Metro area. Which, of course, she did!

Ganahl embraces toll lanes, which have been standard practice for CDOT for years. Her plan calls for continuous toll lanes from Castle Rock to Fort Collins, which would require widening Interstate 25 through the south side of the metro all the way to downtown. CDOT and the Denver Regional Council of Governments just backed away from a planned expansion for part of that stretch of highway.

Really, the only thing missing from Ganahl’s transportation proposal is a pledge to make sure that every Coloradan has a flying car by 2024.

Heidi Ganahl is not a serious person, let alone a serious candidate. She is the most ill-prepared and uninformed candidate for public office that Colorado has seen since Dan Maes was earning 11% of the vote as the GOP nominee for Governor in 2010.