If you can turn the entire event into a circus, perhaps people will have a harder time identifying the clown.

Congressperson Lauren “Q*Bert” Boebert made a rare appearance at a candidate forum over the weekend at Club 20 in Grand Junction. Since she first emerged onto the political scene in 2020, Boebert has made a lot of noise but rarely in a debate setting — this was only the third candidate forum in which she has participated.

Boebert’s performance on Saturday was odd, particularly for someone who is favored to win re-election in November against Democratic challenger Adam Frisch. From a strategic standpoint, Boebert had little to gain from participating in this candidate forum at all, but perhaps she just couldn’t resist the opportunity to spew her tedious vitriol at anyone and everyone.

Rolling Stone found the debate worthy of an entire online story, with several handy video clips included. Boebert’s first move was to immediately attack one of the debate moderators, Edie Sonn of the Colorado Behavioral Health Council, over a Tweet she published two years ago in support of former Boebert challenger Dianne Mitsch Busch.

Lauren Boebert opens up her debate tonight by attacking the moderator. pic.twitter.com/ovtdwvJ657 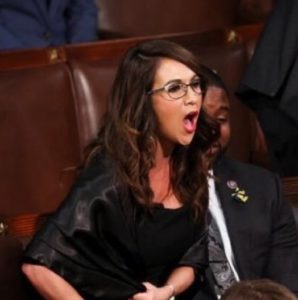 Whether in Congress or on a debate stage in Grand Junction, Boebert has only one volume.

Boebert jabbed even before agreeing to the debate’s ground rules. And she came after moderator Edie Sonn of the Colorado Behavioral Health Council.

Years ago Sonn, Boebert said, tweeted her support for the congresswoman’s then-challenger, former state Rep. Dianne Mitsch Busch. Boebert asserted that the debate was not a nonpartisan event, prompting boos from a few of the perhaps 200 people in Colorado Mesa University’s Robinson Theater.

“This debate is not about me,” Sonn shot back, adding that Boebert was free to leave if she didn’t want to participate in the debate. The congresswoman relented.

Typical Boebert: Big talk, but no action. Just like bragging about carrying a gun around the U.S. Capitol but never actually doing it.

Anyway, if the goal was to loosen up the moderators less they felt compelled to ask her tough questions…it probably didn’t work. Boebert’s fiery first few minutes seemed to mostly generate boos among what should have been a hometown crowd. Boebert’s real goal was probably along the lines of trying to distract from the fact that she never has anything substantive to say.

Boebert didn’t lower the volume after her opening rant. She spent most of the debate…yelling. Literally yelling. And mostly about House Speaker Nancy Pelosi, who was not in attendance.

Ron Filipkowski helpfully put together this “Nancy Pelosi” montage, which should give you a good sense of just how obsessed she is with the California Democrat:

Since Lauren Boebert has no ability to answer substantive questions about policy, her debate strategy last night was just to repeat “Nancy Pelosi’s con game” as the answer to every question. Here is a sample of them put together. pic.twitter.com/AUGUkMGhMi

Boebert also made it clear that she dreams of a United States Congress that is chock full of other Lauren Boeberts:

Lauren Boebert tonight during debate: “Here’s the deal, in Washington, DC, the problem is there’s not enough of me.” pic.twitter.com/r4w5pcd0H4

As is always the case for Boebert, this was not a debate performance intended for Colorado voters. This was a show that Boebert put on for her national base of small-dollar online donors. Her constituency is not in Colorado — it is a group that lives solely within the right-wing social media universe.

It’s too bad that her supporters in the third Congressional district still haven’t figured this out.