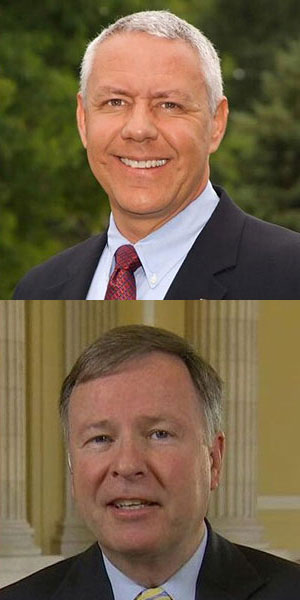 Following the U.S. Supreme Court’s decision this summer overturning the landmark Roe v. Wade ruling guaranteeing abortion rights in all fifty states, Rep. Ken Buck of Colorado celebrated what he characterized as the restoration of state authority to regulate abortion as they saw fit:

The Supreme Court made the right decision in overturning Roe v. Wade, a tragic abortion mandate that has cost over 73 million unborn babies their lives. The power to decide this profound moral question has officially returned to the states, where it will be debated and settled in the way it should be in our democratic society—by the people.

In his statement the same day, Rep. Doug Lamborn likewise heralded the turn of the struggle over abortion rights “to the states.”

While today we are rejoicing, the fight now turns to the states where the American people must go on the offense for life.

But in the same press release where Lamborn said “the fight now returns to the states,” Lamborn contradicted himself by vowing to pursue further federal restrictions on abortion that would apply in all 50 states–no secret, but also making no sense right before celebrating the return of the fight “to the states.” And true to form, as the Washington Post’s Glenn Kessler reports, both Lamborn and Buck have signed on to legislation severely restricting abortion rights at the federal level–demonstrating they were lying about wanting states to decide the question at all:

When the Supreme Court in June overturned Roe v. Wade, which in 1973 established a nationwide right to an abortion, Supreme Court Justice Samuel Alito wrote in his majority opinion for Dobbs v. Jackson that the legality of abortion would now be up to individual states. “The Constitution does not prohibit the citizens of each State from regulating or prohibiting abortion,” Alito said. “Roe and Casey [in 1992] arrogated that authority. We now overrule those decisions and return that authority to the people and their elected representatives.”

Many Republican foes of abortion celebrated the ruling as a victory for states’ rights. Yet since Alito’s draft opinion was leaked on May 2, 28 lawmakers have also signed onto a proposed nationwide ban — one that would impose abortion restrictions even in Democrat-led, pro-abortion rights states. [Pols emphasis]

This would seem to be a direct contradiction to the idea that states could chart their own course. Blue states that have less restrictive laws in place suddenly would find those laws overridden by a federal law.

Kessler reports that Rep. Ken Buck signed on as a co-sponsor of the so-called “Heartbeat Protection Act,” which would ban abortions if a “heartbeat” can be detected–an effective ban since this occurs before most people even know they’re pregnant–on May 27, after the Supreme Court opinion overturning Roe was leaked. Rep. Lamborn signed on as a co-sponsor on July 11th, after the Supreme Court’s decision overturning Roe was published. In both cases they knew that this ruling was coming, and it makes it impossible for them to claim to support returning the question of abortion rights “to the states.”

Will this glaring contradiction hurt Buck or Lamborn in the state’s two safest Republican districts? Of course not. But for fellow Republican candidates like Joe O’Dea trying (and generally failing) to walk a tortuous fine line on an issue expected to turn out voters in force against anti-abortion politicians, Buck and Lamborn’s example is a reminder that there is no longer any tenable middle ground on the issue. With Republicans in control of Congress, this is the kind of legislation that will pass. And a Republican President will sign it.

These are not hypotheticals anymore. Those with nothing to lose have exposed those who do.